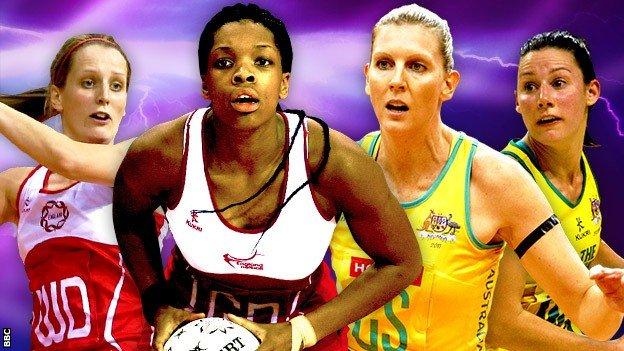 It is a rivalry rich in history and unmatched in sport. Less is more, so the saying goes, but when it comes to England versus Australia, 2013 will be a bumper year for the old enemies.

And while the countdown has already begun for cricket's Ashes, there is another Anglo-Australian rivalry competing for our attention.

England host the formidable Australians in a three-match series this month and the home team, ranked third in the world, will hope to prove they are more than a match for the reigning world champions.

BBC Sport talks to England coach Anna Mayes and asks what we can expect from one of netball's great contests.

There's no place like, erm, England for the world's number one team. Australia have, predictably, mastered a sport introduced to the Antipodes by English school teachers in the 1900s.

But England defender Eboni Beckford-Chambers says the support of a sell-out crowd in Bath, and near-capacity crowds at Wembley and Birmingham, will work in the home team's favour.

"You can't overestimate the power and impetus that having the home crowd behind you and cheering you and shouting for you has. It's like having an extra player on court," she says.

"Having played [in Australia] in October, we definitely feel the presence of the crowd out there and sometimes they can get you over the line."

The Diamonds do not sparkle only in England. They usually dominate their opponents wherever the court, which makes the task facing coach Anna Mayes and her team a daunting one.

England have only beaten Australia twice in a rivalry that stretches back to 1956, the most recent victory over the 10-time world champions coming three years ago in Liverpool when the hosts celebrated an unexpected 41-40 win.

The latest meetings between the two nations came in the Quad Series in Australia and New Zealand in the autumn.

Australia again asserted their dominance over New Zealand, South Africa and England, winning the series and comfortably beating England twice - in the process scoring 121 points against them.

"Their consistency across four quarters is key," says Mayes. "They are very clinical.

"Although I think we've got probably got more flair and creativity, just their ability to be clinical under pressure is something we need to ensure we do time after time, quarter after quarter."

The brilliance of Barcelona striker Lionel Messi ensured the Argentine swept most of the awards football had to offer in 2012, but Australia's Madison Browne (almost) did the same in the world of netball - to considerably less fanfare, of course.

Why is the series important?

Even though Australia have won most of the meetings between the two countries, England say they are closing the gap.

England are arguably building one of their greatest teams, helped by an increase in participation and weekly television coverage of the country's domestic Superleague.

They are leading the charge against the Aussies and New Zealand, the sport's two dominant forces, and the three-match tussle will give Mayes the chance to gauge her team's progress towards the 2014 Commonwealth Games.

Beckford-Chambers says: "It's always a challenge when we play Australia and New Zealand but we are bridging the gap game by game and hopefully by the time we get to the Commonwealths and even the World Championships in Sydney we can actually give them a good run for their money."

"The measure of success won't just be about the scoreboard. We obviously are confident [but] we have to be realistic," says Mayes.

"They are number one. We had quite a large goal deficit in October so there's no point trying to shy away from that.

"Consistency is a key word the girls keep hearing from me. We have to ensure we get consistency over all quarters if we are going to take a game from this team or even take the right steps forward for the Commonwealths.

"Yes, we do want to take a game at least off this Australian side - but we also need to look at other measures to ensure we build on success, not undermine it."