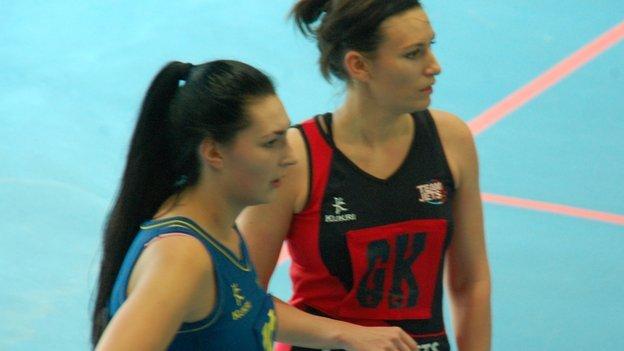 Jersey's Team Jets remain unbeaten at the top of netball's South West Regional League One after a 56-37 win over Team Bath "A" at Les Ormes.

The islanders raced into a 21-8 lead after the first quarter and had extended their advantage to 38-19 at half-time.

The Westcountry side battled back after the break and won the third quarter.

But the league leaders, without their ill captain Lauren Devine, were not to be denied a ninth win from 10.

The structure's in place in Jersey to produce technically good netballers

"All credit to the girls, they came out with a game plan, and we did stretch to a really good early lead," Jets coach Linda Andrews told BBC Radio Jersey.

"A lot of these girls I've had since they were nine or 10, so they know me and I know them.

"They're just such a good group together and they all want the same outcome.

"I think the structure's in place in Jersey to produce technically good netballers and it's all coming together for us at the moment."

Team Bath remain in mid-table while Team Jets stay on course for another promotion.