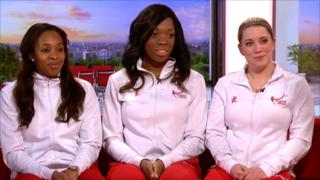 Netball wants to toughen up its image

England's netballers tell BBC Breakfast how they are hoping to change the public's perception of the sport from "ladylike" to "very physical".

The sport has benefited from increased grassroots funding and now hopes a three-match series against world champions Australia in January will help raise its profile.

Defender Eboni Beckford-Chambers, who plays for Perth side West Coast Fever, believes England can catch up with Australia's professional netball system "in five to 10 years".