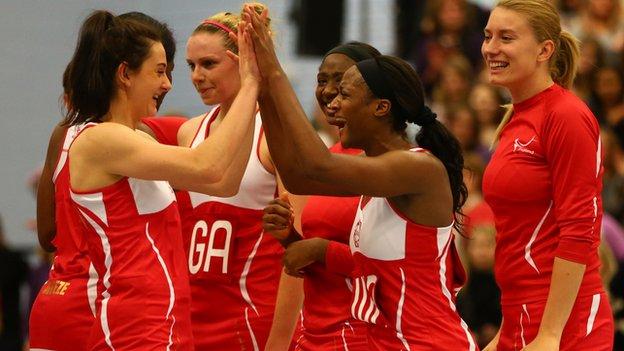 England sealed a series whitewash with a 50-36 victory over Jamaica in Kingston on Sunday.

Anna Mayes' side made it six wins out of six in 2013, the 3-0 series win over Jamaica following a first-ever whitewash of Australia.

"To win on Caribbean soil is harder than at home and we should be really proud of our efforts," said Mayes.

"We have excellent strength in depth. It will cause a headache when deciding the 12 for the Commonwealth Games."

England weathered an early storm and took a 15-8 lead into the second quarter, after which the score was 26-20 to the visitors.

After a scrappy third quarter the visitors were 34-30 in front, but Rachel Dunn was introduced by England in the final quarter and the experienced shooter helped the visitors to pull clear.

The focus for the squad remains the Commonwealth Games in Glasgow 2014 and Mayes was pleased with the progress being made.

"We have exposed people at the right time. Experience in the squad is key and players now know they have to earn the opportunity to take to the court," said Mayes.

"We now have a really diverse, demanding squad with different playing styles."