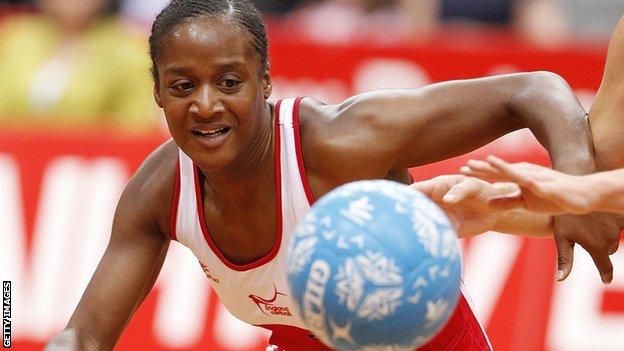 England beat South Africa 51-33 at Wembley Arena to take an unassailable 2-0 lead in the three-Test series.

In front of more than 5,000 fans, the hosts dominated the opening quarter against their lower-ranked opponents to establish a 29-18 half-time lead they never looked like surrendering.

England captain Pamela Cookey told BBC Sport: "I'm so proud of the girls. We stamped our authority on the game."

The final Test of the series takes place in Worcester on Friday.

"We're still building and, putting things into perspective, we won't get everything right now," Cookey continued.

"We want to peak for the Commonwealths Games. Playing South Africa is a really good chance to see where we're at and see what we need to build on.

"If we're performing well against those kinds of teams when we step on court with the likes of Australia and New Zealand, we know we can do it then."

This latest series win continues an impressive 2013 for England who earned a first-ever series win over reigning world champions Australia in January.

South Africa matched England's bright start but could not cope when the home side upped the pace and opened up a 10-point lead mid-way through the second quarter.

There was some clinical finishing on display from South Africa's Melissa Myburgh, but England's solid defence across the court gave her minimal opportunities under the ring.

England, ranked three places above the Proteas at third in the world, strengthened their side at half-time as experienced defender Geva Mentor came off the bench. The home side soon extended their lead and were 41-25 up at the end of the third quarter.

With Mentor standing strong in her semi-circle, South Africa were continually forced to take shots from long range as the game entered the final period and were unable to make inroads into England's lead.

Listen to live commentary of the final England v South Africa Test on Friday at 19:45 BST at bbc.co.uk/sport.