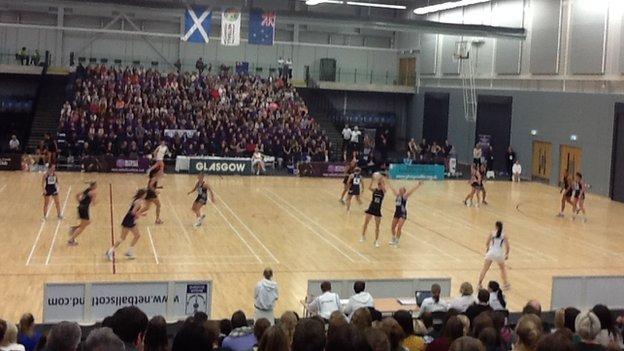 The Silver Ferns, ranked second in the world, were bigger, faster and more clinical at the net than the Scots.

But the result was scarcely in doubt after New Zealand ran up an early lead in the first of two exhibition matches.

Their combination of speed and power meant it was a torrid evening for the Thistles defence for whom Hayley Mulheron and Rachel Forbes battled endlessly and lifted the crowd in the packed Emirates Arena with some timely interventions.

Prior to tip-off, the Scotland coaching team had been hoping to keep the final score to within a 40-point margin.

But they were 11-1 down after eight minutes and trailing 18-5 at the end of the first quarter, with centre Samantha Murphy tasked with supplying Lesley MacDonald and Lynsey Gallagher with goal attempts.

Parata moved Murphy to wing attack for the second quarter and brought in Fiona Moore as centre but the stylish Silver Ferns continued to rack up the goals and they enjoyed a 35-7 advantage by half-time.

Scotland's best goal was scored in the third quarter as the vastly experienced MacDonald finished a blistering counter-attack involving five players. That brought the score to 51-9, with the quarter ending 54-10.

The energetic June McNeill had mixed fortunes as goal-shoot for the Thistles and she and her team-mates will hope to improve on their conversion rate of scoring chances when the teams meet again in Glasgow on Tuesday.

However, there were pleasing signs in the final quarter when McNeill spearheaded a mini revival as Scotland scored eight goals to the Silver Ferns' 18.

This was the first match in New Zealand's UK January tour. After the second match with the Thistles they head to London for matches against Jamaica and England, ranked fourth and third in the world respectively.

The Scottish Thistles and Silver Ferns are in the same pool for this summer's Commonwealth Games.

After the match, Parata, herself a former Silver Ferns player, told BBC Scotland: "We had our opportunities. We needed to score our goals but unfortunately we only got 56% and that's not good enough. I would have been happy with 70%.

"We did some really good stuff but not consistently enough.

"The second half was good because we eliminated a lot of the unforced errors.

"There was a lot of good ball movement. We were more consistent in the final quarter. We just need to build on that.

"One of the things I wanted to do was get everyone on court, which we did, and to see who could stand up to the pressure and who may struggle a bit.

"I knew for us to do well we needed to have a really strong team effort from 12 players, so from that perspective I'm happy.

"I hope the Scottish public understands that we are on our way.

"I tried to get the team as well prepared as possible for this kind of netball."