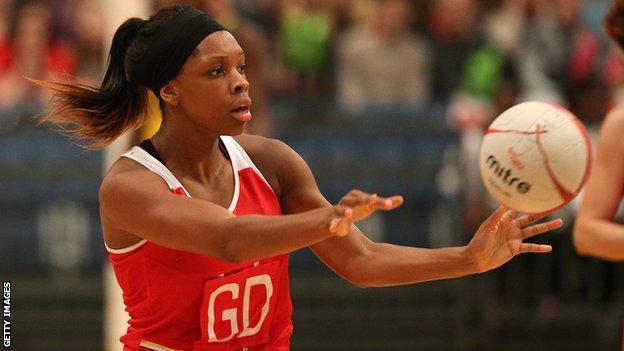 England got their 2014 competitive season off to a winning start with a 46-38 tri-series victory against Jamaica at Wembley Arena.

The hosts, ranked third in the world, claimed a 20-19 interval lead against opponents one behind in the rankings.

They accelerated away after the break and took control of the game and now face New Zealand on Monday.

England defender Eboni Beckford-Chambers told BBC Sport: "We've got to be happy with that result.

"We were probably a bit patchy in the first quarter but we built up towards the end of the game.

"We knew Jamaica were going to come out really, really hard, so we had to start well."

The teams were evenly matched in the opening quarter, but Jamaica just edged 10-7 ahead as England missed opportunities at the net.

In an increasingly physical contest, the home side fought hard to grab the lead in the second period and just managed to stay in front at the interval.

After the break, Kadeen Corbin joined the England's attack as a replacement for Pamela Cookey and linked up well with goal shooter Jo Harten to help take control of the game.

England now face New Zealand, ranked as the world number two side, at Olympic Park aiming to build on a successful 2013, which included an historic series win against world number one Australia.

"We had a great 2013 and we know we need to keep that momentum going into the Commonwealth Games," said England centre Serena Guthrie. "It's so close now you can almost feel it."

"We know we can be genuine contenders for a medal. We've always been a team dubbed for coming third and we're definitely looking to break that historical, stereotyping thinking of England."