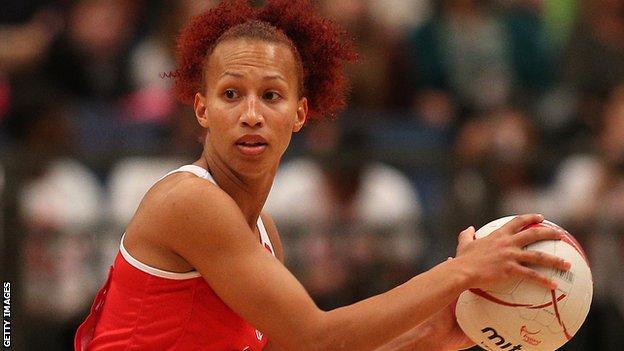 England lost 49-32 in their Tri-Series game against New Zealand after having to change venue at short notice.

The game was due to be staged at the Copper Box Arena at the Olympic Park, but the arena floor was declared unplayable.

The venue change definitely had an impact

"It's not the preparation we wanted," captain Pamela Cookey said as her side were confirmed as runners-up at the Crystal Palace National Sports Centre.

England's final game of the series is against Jamaica on Tuesday.

Cookey added: "The venue change definitely had an impact, but when we trained this morning everyone was feeling fresh and sharp and we did the same routine as if we were playing at the Copper Box."

Four games were scheduled to be played at the Copper Box Arena on Monday and Tuesday.

But they were all moved to Crystal Palace after a fitness exhibition at the Olympic Park venue left the floor full of holes.

The switch forced England Netball to refund ticket-holders at a cost of at least £50,000 and meant Monday's game took place in front of only family and friends of the players.

England made a blistering start to the game as the attacking partnership of Jo Harten and Cookey linked up well under the net, but New Zealand hit back to lead 23-20 at the interval.

The Silver Ferns continued to pull away in the third and fourth quarters, with England unable to defend against their pacy attack.

"New Zealand have an awesome set-up," Cookey said. "Their ANZ League keeps them sharp throughout the season and they're able to keep so calm and composed. Their defensive pressure throughout the court made us hesitate."

With New Zealand one of England's main rivals at the Commonwealth Games in Glasgow later this year, Cookey says England need to work hard to improve their game.

"We learned a lot," she said. "We need to take the positives. We know we can come out for a quarter, but now we need to do it for all four quarters."