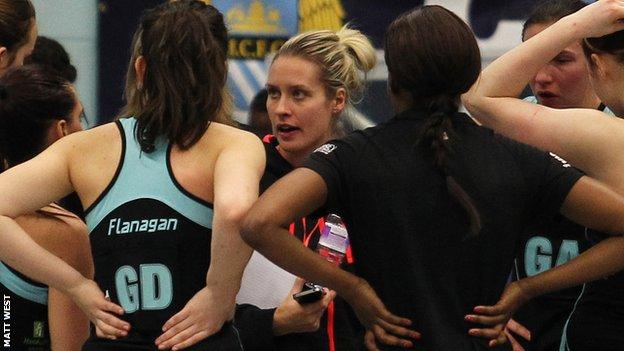 Surrey Storm player-coach Tamsin Greenway says being sidelined for the Superleague campaign in 2013 has helped her to improve as a coach.

The 31-year-old sat out the season while pregnant with her first child.

"I could actually just coach. I had never done that before," Greenway told BBC Surrey.

"I could pick up on the things I needed to do. When you are out there in the game it is really hard to take a step back and do the coaching as well."

She added: "That has put me in good stead for this year being player-coach again."

Greenway gave birth to daughter Jamie last summer and has returned to the Storm's playing squad this season.

"The biggest thing for me was probably the tiredness and getting over that," said the wing-attack.

"I wanted to play but leaving her behind to train and get fit was the hardest thing. I am feeling match-fit now."

Greenway has not yet ruled out representing England at the Commonwealth Games in Glasgow in July.

She won 51 caps over an eight-year period until stepping down from international duty in 2012, but says concentrating on her form for Surrey Storm is her primary goal.

"When I stopped from England I took a break. I didn't retire," she said.

"However I am not putting my name out there. My aim this year was to get fit and to play for Storm - anything else is whatever it is.

"If I am good enough at the end of the year and there are opportunities or whatever, then we'll see.

"There are three months and going to be so many things happening; there will be new players coming through, injuries and all sorts building into these Commonwealth Games.

"My plan is to get through the season and see where we are at at the end of April."

The Storm are top of netball's Superleague after the opening three rounds of fixtures.

The Surrey Sports Park side reached the Grand Final in 2011 and 2012 but were beaten play-off semi-finalists last year.

"All teams go through dips and troughs and we are rebuilding," Greenway said.

"We are in good stead again this year and are starting to bring the youngsters through, which is really important for a new franchise.

"You can challenge every year. Are we the perfect team? No, but we are a good team."