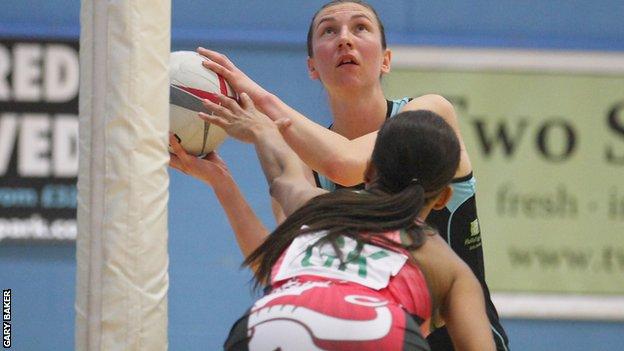 Surrey Storm regained their spot at the top of the Superleague with victory over Celtic Dragons.

Manchester Thunder and Team Northumbria leapfrogged the Storm at the weekend after beating Yorkshire Jets and Loughborough Lightning respectively.

But Tamsin Greenway's side moved back into first place following Monday's 69-48 victory in Wales.

In Saturday's other fourth-round result, Team Bath edged to a narrow 48-47 win over Hertfordshire Mavericks.

Surrey's score against Celtic Dragons is the highest of the Superleague 2014 so far, while the Dragons, last year's runners-up, have now lost three of their four games.

Speaking after the game to Sky Sports, player-coach Greenway praised team-mate and goal-shooter Rachel Dunn, who won player of the match.

"I've known Rach since I was 15, we came through England age groups together and we were at Team Bath for such a long time," said Greenway.

"I pretty much stole her when I came to Surrey Storm. I said if I was going to move I wanted her as well.

"Rach, for me, is probably the easiest feeder in the country, or the world, that I've ever played with."

Surrey's score was the highest of the Superleague this season, while last year's runners-up have now lost three of their four games.