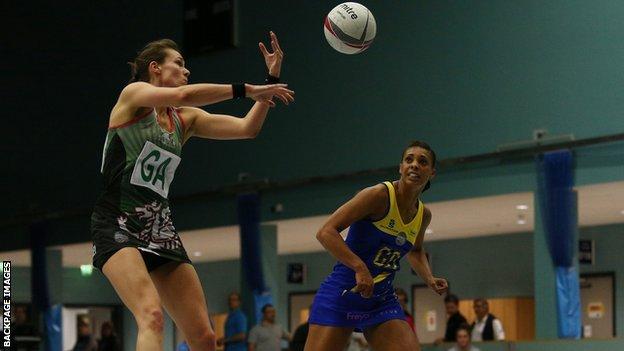 Celtic Dragons claimed a hard-fought 62-62 draw with Team Bath in round six of Superleague.

In a re-run of last year's Grand Final, Dragons edged the second and third quarters 13-14 and 16-17 before reigning champions Bath opened a three-point lead in the final stage.

But precise shooting from Lottysha Cato earned the visitors a point.

Elsewhere, there were wins for Yorkshire Jets, Manchester Thunder and leaders Surrey Storm.

It was a first win for the Jets since the season opener, and they convincingly beat Hertfordshire Mavericks 50-39.

The results mean Surrey remain one point clear at the top of the standings, ahead of Manchester in second.

"I've got to be happy with the result and scoring over 60 goals," Storm player-coach Tamsin Greenway told BBC Newcastle.

"But I think we were patchy at times and that was down to what Northumbria did to us.

"I keep saying to our team that you need to punish people. The frustrating thing for me is that we can put 18 goals on in the first and but then drop down. We've got to keep pushing those margins.

"Fair play to Northumbria. They play really tidy netball and play well together as a team. They caused us hassle."