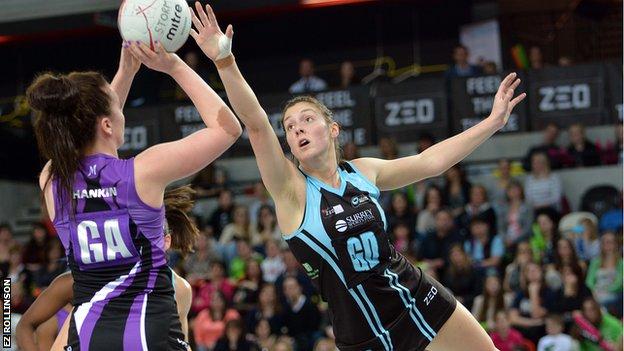 Superleague leaders Surrey Storm edged to a narrow 52-50 victory over Hertfordshire Mavericks in the UK's biggest ever domestic netball match.

And despite Surrey's 10-point lead going into the final quarter, Mavericks rallied to set up a tense finish.

Superb shooting from Kadeen Corbin brought Herts to within a point of Storm, but it was too little too late.

The result means Surrey remain unbeaten this season and stay top of the table going into round eight, while Mavericks remain fourth.

The attendance at the Superleague showpiece, held on International Women's Day, was almost double the previous record of 1,607 achieved at last year's grand final between Team Bath and Celtic Dragons.

The atmosphere was electric throughout, and tensions were particularly high in the dramatic final quarter.

It was the Mavericks who took the lead with two quick goals but their indiscipline in defence proved costly, as England international Rachel Dunn kept her cool under the net to give her side a 16-12 lead after the first quarter.

The Mavericks showed some slick mid-court play in the second quarter, wing attack Sasha Corbin impressing on her return from injury, but Dunn kept up her form as Storm opened up an eight-point advantage at the break.

And that lead extended to 10 points at the end of the third, with substitute goal attack Katie Harris coming on to aid Storm's cause.

But Mavericks coach Karen Atkinson introduced Rose Morgan-Smith and her side came to life.

The deficit was reduced to five points when Surrey player-coach Tamsin Greenway called a time out, but it did not affect Herts' concentration.

Kadeen Corbin's accuracy in the circle rallied the two-time champions and they battled to within a point of their local rivals with 45 seconds left on the clock.

But Surrey held their nerve to add a late goal and secured their sixth victory of the season.

In other round seven results, Celtic Dragons came from behind to seal a late 70-67 victory over Yorkshire Jets, Manchester Thunder beat Team Northumbria 65-35 and Loughborough remain winless after losing 58-47 against Team Bath.