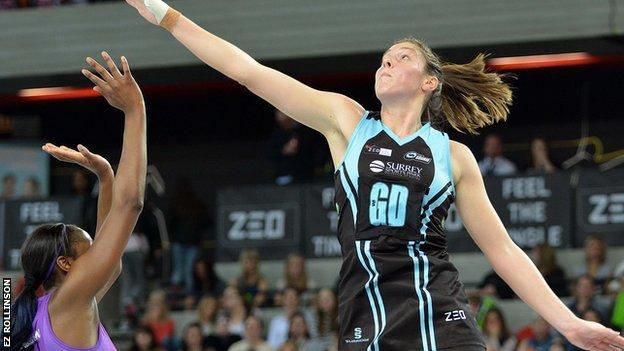 League leaders Storm chose to move their home match against local rivals Mavericks to the Olympic Park arena in order to attract a bigger crowd.

Over 3,000 tickets were sold for the game, which Surrey won 52-50, doubling the previous UK attendance record.

"We wanted to prove we could get 3,000 people here," Greenway told BBC Sport.

"Had it been announced earlier we would have got more down. Hopefully it's a benchmark and we can start putting on finals in places like this."

"This is the sort of spectacle we could have all the time. It shows the massive demand we have."

The round seven match became the biggest ever domestic netball game to be staged in the UK and the result saw unbeaten Surrey stay top of the standings.

But they were pushed to the final whistle by fourth-placed Mavericks, who came back from 10-goals down to within one point of the Storm with 45 seconds remaining.

"They're playing brilliantly at the moment but I'd rather not have a heart attack at the end of the game," added Greenway.

"We stuck at it and got there in the end, but we can't keep doing that when we are under pressure. The sign of a winning team is pushing on through the pressure."

Fellow wing attack Corbin was making her return after five weeks out with an Achilles injury and despite the result, she was proud of her side's resolve in the final 15 minutes.

"The last quarter showed the real fight," she said. "It was amazing to see the girls step up.

"It's all about learning. There's been some massive steps forward and it's about being able to progress and build.

"We needed to look after our own possession and sometimes we did lose it. But the last quarter showed we can come back and turn around a deficit."

Surrey return to the Surrey Sports Park next Saturday when they take on second-place Manchester Thunder, while Hertfordshire travel to Celtic Dragons on Friday.