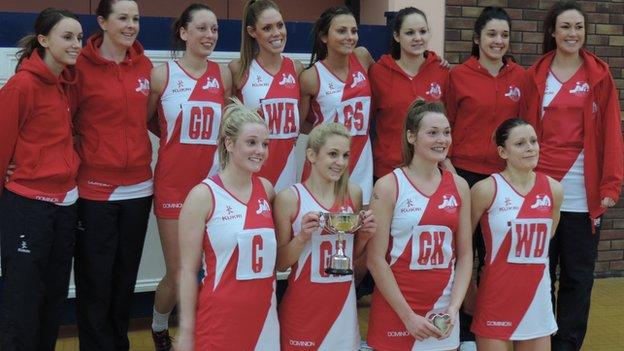 Jersey continued their recent dominance of the netball inter-insular, beating Guernsey 48-28 in the A-team match at Fort Regent.

The win was a ninth in a row for Jersey in the annual contest against their Channel Islands rivals.

They were made to work hard for victory though, finding themselves three goals adrift after the first quarter.

"The rest of it we just put our foot on the pedal," said Jersey coach Linda Andrews.

"We worked out what Guernsey were doing and then shut them down and it went on from there.

"I just thought my girls were sensational and in the third quarter to just deny them to three goals was incredible."

Guernsey had started the game well though and held a surprise 10-7 lead after the first 15 minutes.

Jersey battled back to hold a 20-19 advantage by half-time and then restricted the visitors to just nine further goals as the Reds pulled away for victory.

"The first half we were absolutely awesome and we took it to Jersey," reflected Guernsey coach Gill Queripel.

"We rocked them right back but credit to Jersey, they came out fighting and they were dogged in their determination.

"I don't think the scoreline actually reflected the game, we matched them in several areas of the court, we've just got to take that extra edge and get a whole game instead of half a game played."

Jersey won seven of the eight matches at various age groups over the weekend of action, with Guernsey's only triumph in the over-35s.

Both islands have teams targeting promotion in UK leagues. Jersey's Team Jets are unbeaten and leading South West Regional One, while Guernsey Panthers have

The Panthers will fly to the UK at the end of the month, and will take on Brize Jets, Weston Park Blades and Swan Centre for promotion. Meanwhile the Jets could wrap up the league title and edge closer to a spot in Premiership Three on the same day.