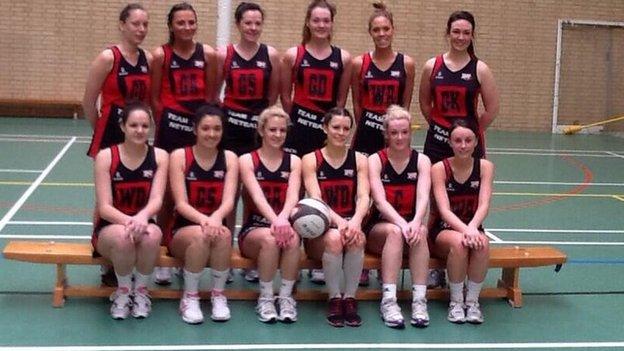 Jersey's Team Jets secured the South West Regional One title with a 49-29 victory over Poole Aquarians.

The win on Sunday, coupled with a 64-41 victory over Team Bath A on Saturday, means Jets end the season unbeaten.

The win puts Jets through to the play-offs for a place in Premiership Three.

"I'm absolutely over the moon, we've been hankering for this for two seasons and I'm so proud of everybody to win in that style," Jersey coach Linda Andrews told BBC Radio Jersey.

Team Jets led from the start and were never behind in Sunday's tie, ending the first quarter 12-9 ahead.

After exchanging a series of goals in the opening minutes of the second quarter, Andrews' side began to pull away, at one stage scoring twice in 30 seconds after rapidly turning defence into attack and catching Aquarians off guard.

Aquarians had the height advantage in their defensive third but failed to make it pay, as Jets led 23-18 at half-time and extended their advantage to 10 goals by the end of the third quarter, thanks in part to six consecutive goals midway through the period.

The islanders opened the final quarter in the same vein, continuing to press on and snatching five unanswered goals, going on to open up a 20-goal margin before the final buzzer sounded with the score at 49-29.

"We played to our strengths. They had the height but we kept front-cutting, so that helped us," Andrews said.

"It's hard when you're putting a team together, but it's a whole team effort for all of the games since last September."

Andrews' side will now be involved in a play-off tournament in Loughborough in May, featuring the other eight regional winners plus the bottom three sides from Premiership Three.

The sides play a series of pool matches before finals to decide who gets the three places in the higher division next season.