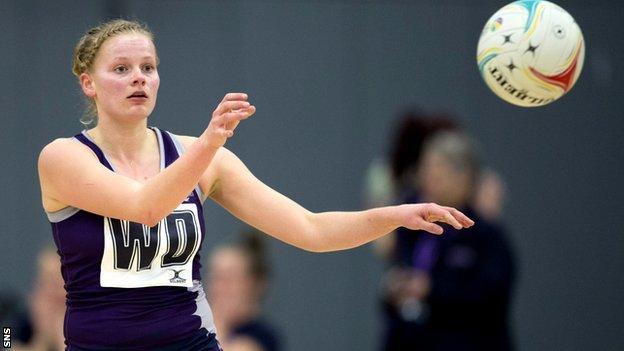 Scotland's netball team secured their third Test win in as many days against Trinidad and Tobago to boost their confidence ahead of World Cup qualifiers and the Commonwealth Games.

After a tight first half, the Scottish Thistles pulled clear in the third quarter to lead by 10 goals and ended up convincing 44-30 victors in Glasgow.

That followed 41-40 and 44-34 wins in the first two tests, on Monday and Tuesday, against the Caribbean side.

Gail Higgins was player of the series.

The 34-year-old dental nurse excelled against the physical Calypso Girls, who, at eighth, are four places higher than the Thistles in the world rankings.

The trio of Tests was meant to end on Thursday but changes to travel arrangements meant organisers had to stage the first match on Monday, a day earlier than planned.

That had to be played behind closed doors because the venue was still in the throes of being de-rigged after Sunday's BBL Trophy final featuring Glasgow Rocks.

Tuesday's match had taken its toll on the squad with shooter Lynsey Gallagher on crutches on the sidelines to watch her team-mates play the third Test.

But the hosts' fitness was evident as they drew away from Trinidad and Tobago as the match progressed.

While confidence surged through the Thistles, urged on by their enthusiastic fans, the Calypso Girls seemed out of sorts and divided.

Hayley Mulheron, sporting a black eye after some robust exchanges defending her goal, told BBC Scotland: "In the first test there was one goal in it, then there was 10 and today there was 14, so it shows that we improved all the way through the Tests.

"It was a great performance winning all three Test matches. It's awesome."

For head coach Gail Parata, the results were pleasing.

"The Scottish Thistle have never won against Trinidad and Tobago so to win the series against them is a fantastic result for us," said the New Zealander.

"We are trying to work our way up the rankings and that was a good start.

"We have been focusing on some fundamentals for the past seven months and working on fitness levels and for the girls to go back to back for three tough matches and see them competing all over the court was great.

"I managed to get all 12 of the squad out on court across the three matches.

"When we come to the Commonwealth Games we have to be clever how we use our substitutions. They all know they can go on court at any time so they have to be ready."

Parata will hope the momentum carries the team through a very busy spell in the coming months.

In May the Thistles have been invited to play England in training matches. After that it is the Commonwealth Games trials, with only 12 places up for grabs.

The squad will then be joined by some training partners from Parata's homeland before they head to Wales for the Open Netball Europe Championships, which also serve as the European qualifiers for the 2015 World Cup to be held in Sydney.

In June the squad heads to South Africa.

Mid-courter Karin Connell played in the two Tests against the Silver Ferns in January and feels the exposure to teams in the top 10 in the world is helping develop the Thistles.

"We do a lot of analysis of our games and we are coming up against different styles," said the 31-year-old wing attacker and centre.

"The Kiwis gave us another dimension to our game - the aerial ball, the flair - so we know how to defend that. It has given us more skills."

Her team-mate Brownie, 25, added: "Going into the Commonwealth Games it's looking really strong. We are all competing all the time at training to get into the 12 then the seven to get on court.

"We want to be strong across two positions individually. If you can bring that, it adds versatility and your opponents don't know what's coming.

"We've got about six weeks until our final selections. All you can do is your best. We've got to dig in and fight for our positions."