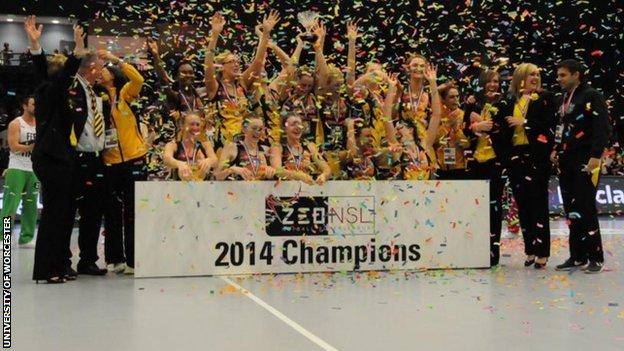 Storm were favourites to claim the silverware after an impressive regular season and looked confident at half-time, going in 26-22 ahead.

But Thunder held their nerve and were level on points with less than a minute to go.

And they won it from a superb turnover, finished off in style by Helen Housby.

It inflicted a first defeat of the campaign on table-toppers Surrey and they will continue their five-year search for a trophy since forming in 2009.

It was a cruel blow for Tamsin Greenway's side, who lost by two points to Thunder in the 2012 final, but once again they failed to shut out their opponents, who were led superbly by England international Sara Bayman.

Tracey Neville's Thunder, who finished second in the table, started with intent and opened up a four-point lead midway through the first quarter, although Storm pulled it back to end the session only one behind.

Surrey eventually found their stride in the second quarter and, inspired by the reliable link-up between wing attack Greenway and shooter Rachel Dunn, they went ahead for the first time and finished the first half four points up.

Once again Thunder came out fighting and a flawless turnover - instigated by Bayman and executed under the post by Housby - brought them level.

They struggled to hold on however and, after Krista Enziano was penalised for footwork, Surrey found the lucrative turnover and went in two points ahead at the end of the third quarter.

But Thunder never gave up hope and with the score at 48-48 and 25 seconds on the clock, they pounced on a loose Surrey ball, fed it to Housby and she coolly netted the winner to take the title to Manchester for the second time in three years.

Prior to the grand final, Hertfordshire Mavericks beat last year's champions Team Bath in the play-off for third place in the league.