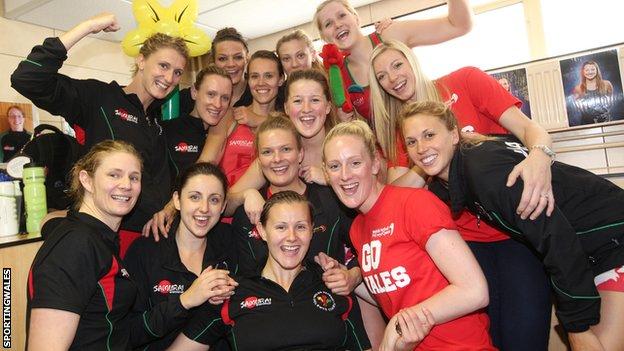 Sport Wales chair Laura McAllister says netball will be the surprise story of Glasgow 2014 following Wales' qualification for the 2015 World Cup in Sydney.

Wales won all three of their games in the Netball Europe Championships and have now qualified for the World Cup.

Following these wins, McAllister says Wales could cause a shock at the Commonwealth Games.

"Netball is going to be a real surprise story in Glasgow," said McAllister.

"They'll be going into Glasgow now on a real high and believing that they can push some of those countries ahead of them in the world rankings.

It's great to have the three wins under our belt, and it's great preparation going forward to the Commonwealth Games

"We've talked about Glasgow since the last Games finished in Delhi, so it's hard to believe that we're just a matter of weeks away now.

"I think netball could pull off a few surprises so I just can't wait."

The clean sweep at Netball Europe in April - beating Northern Ireland, Scotland and the Republic of Ireland - is even more impressive as Wales were without head coach Melissa Hyndman due to "personal reasons".

The New Zealander has managed Wales during their climb from 19th to eighth in the world rankings.

In Hyndman's absence, assistant coach Laura Williams has taken charge and she praised the focus that led to a clean sweep in World Cup qualification.

"It was tense from the first whistle.

"We pulled away but let them come back, so we need to learn to take the game away from the other team.

"But it's great to have the three wins under our belt, and it's great preparation going forward to the Commonwealth Games."

Wales have yet to finalise their squad for Glasgow 2014, with a formal announcement expected by the end of June.