The 14th Netball World Cup begins in Sydney, Australia on Friday and is set to be the biggest in the competition's 52-year history.

Sixty-four matches will be played over 10 days, with 16 teams competing for the world title at two venues in the city's Olympic Park, including the 18,200-capacity Allphones Arena.

BBC Sport guides you through the likely winners, the sport's 'Harlem Globetrotters', prospects for England, Scotland and Wales, and why some players have been washing cars to ensure they can participate.

As the host nation, Commonwealth champions, top-ranked team in the world and winners of 10 of the previous 13 tournaments, including the last edition four years ago, Australia are the firm favourites.

New Zealand have long been their fierce rivals. Ranked second in the world, the Silver Ferns have claimed the World Cup on four occasions, but have finished runners-up to Australia seven times.

The only other country to have held the trophy is Trinidad and Tobago, who shared it with Australia and New Zealand in 1979 when there were no finals and each won eight out of their nine round-robin matches.

Jamaica, also known as the Sunshine Girls, have showed they are World Cup contenders by beating England - who are in their group - to Commonwealth Games bronze at Glasgow 2014. They have also finished in the top four at every major event since 1991.

England, ranked number three in the world, should also be in the mix for a medal. They came third at the last World Cup in Singapore and lost by only one goal against Australia and New Zealand at the Commonwealths. 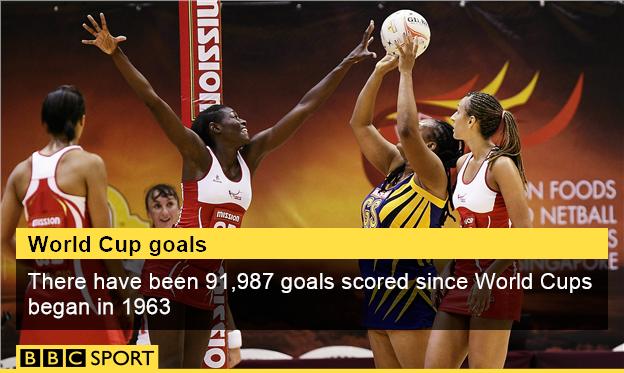 So England go in confident then?

England are unbeaten under new coach Tracey Neville, who took over in March, after their disappointing fourth-place finish at the Commonwealths.

A 3-0 series win over Trinidad and Tobago in May was followed by victories over Scotland, Wales and Northern Ireland to clinch the Netball Europe Championship crown.

Neville has picked an experienced squad for the World Cup. Captain Geva Mentor, voted the best netballer in the world in 2014, will feature in her fourth championship and is one of six players aged over 30.

After four bronze medals and one silver, Neville says being the "nearly team" is no longer acceptable for England. "We're good on paper but not so good on the court," she told BBC Sport. "I asked them 'how long can we be the nearly team?'

"We've got the individual players to go out and compete against the top players. But you can't just play with your mate next to you. If we don't develop a team ethos, we're not going to gain anything. They're now a more positive team, are harder on themselves and they expect more."

What about the other home nations?

Scotland are ranked 11th in the world and have never finished higher than sixth at a World Cup. The Thistles failed to qualify for Singapore 2011 and won two of their six matches at their home Commonwealth Games last year.

But in a bid to strengthen their cause in Sydney, they brought in New Zealand star Irene van Dyk, the most capped international player of all time, to help with their preparations.

Scotland defender Hayley Mulheron said of their World Cup hopes: "Our aim is to be competitive in every match but we have to put out strong performances to prove we can compete with the world's best."

Coach Trish Wilcox takes Wales into the World Cup after an encouraging third place at the Netball Europe Championships, where they beat Scotland and Trinidad and Tobago, drew with hosts Northern Ireland, but lost to England and South Africa.

Suzy Drane captains an experienced squad who have amassed 301 caps between them, as Wales go to Sydney looking to improve on their ninth place in Singapore four years ago.

Wales will expect to reach the qualification round matches as one of the leading eight teams from the four pools.

"I think it's a very exciting time," Wilcox said. "Australia are going all guns out to make this an amazing World Cup."

Who else should we look out for?

Despite being one of the most underdeveloped countries in the world, Malawi have risen to fifth in the world rankings.

The Queens are the nation's most successful sporting team and have become known as the 'Harlem Globetrotters' of the netball world, their unorthodox style of play featuring tricks, flicks and fancy footwork to combat the height and strength of more developed sides.

They finished fifth at the World Cup in 2007 and sixth in 2011, and famously beat Australia in the short-form Fast5 tournament in 2012.

Uganda's netballers have reportedly had to wash cars - for $22 per vehicle - in order to fund their campaign in Sydney.

The She Cranes, who are 14th in the world rankings, secured only their second ever World Cup place by winning the African Qualification Tournament.

But funding is tight and Uganda's football president Moses Magogo wrote on Twitter: "We cannot sink lower. National netball team going to the World Cup and players washing cars to get preparation money.

"In my view we rather not present the team to the World Cup than humiliate ourselves to this level. Both government and whoever came up with this idea should think again."

Spending 10 days in one of the world's most expensive cities may be financially challenging for the likes of Malawi, Uganda and Jamaica - who have asked for public donations to fund their squad - but a global audience will bear witness to their skill and spirit.