Loughborough Lightning's shock 60-65 away win inflicted a first loss of the season on Manchester Thunder in round six of the Superleague.

Strathclyde Sirens won 60-54 against London Pulse, who remain at the foot of the table.

Lightning travelled to Manchester on the back of a 50-75 defeat to Team Bath and with the Black and Yellows holding a 100% win record, victory looked a tall order.

Even Lightning head coach Sara Bayman - the former Thunder captain - admitted the result at Belle Vue was a surprise.

"It was a bit of a shock because of how badly we played the week before," Bayman said, adding it was a "special" win.

"I knew what we were capable of but we were just not putting it out there. I'm more happy for the players than anything.

"Not many teams will go to Manchester and get a result - you know what you are getting with them, they work hard for the full 60 minutes."

The scores stayed on centre-pass for long periods with Thunder edging the first half 34-32.

As Lightning found rhythm and momentum in the second half, Thunder lost theirs to see the visitors head into the final break three goals in front.

Lightning held their nerve in the final moments to record a morale-boosting away win.

Bayman, who is in her debut season as a coach, is now demanding more consistency from her squad, with Lightning's season record sitting at three wins and three losses.

"I've been trying to work out why we are so up and down, but it's a new squad who were finding their feet - I think we are through that stage now," the 34-year-old said.

"We made some adjustments to training to find the right formula and it's been a lot of trial and error.

"We need to maintain this now. Every game is important, there are no easy games in this league." 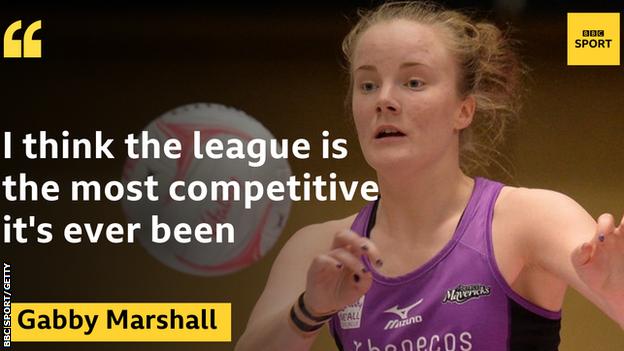 Saracens Mavericks lifted themselves above Thunder in the league table with a convincing win over disappointing Team Bath.

Bath's showing was in part due to the absence of their two Commonwealth champions Serena Guthrie and Eboni Usuro-Brown, but Mavericks were in particularly ruthless form.

"It was great to get the win and was a fantastic team performance," said Mavericks' influential centre Gabby Marshall, who has just returned to the court after suffering an ankle injury on England duty in January.

"I'm feeling more comfortable the more I play and I was happy to get another three quarters against Bath.

"I offer a consistent attacking and defensive game, but we're fortunate at Mavs to have an array of centre court talent."

"We are happy with how we are building this season."

Wasps and Celtic Dragons were level at 13-13 after the first quarter of their match in Cardiff but the visitors pulled away in the second and third quarters to ease to victory.

Surrey Storm continued their run of good form with a solid away victory over Severn Stars, which saw them climb to fifth in the table and avenge their loss to the Midlands-based side in the opening fixture of the season.

Stars are now without a win in three attempts but received a boost this week when England defender Jodie Gibson, who is yet to feature this season due to injury, returned to training.

Sirens claimed their second win of the season, edging ahead in the second half in London to beat Pulse.