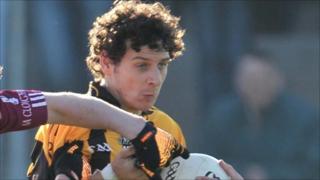 Jamie Clarke expresses his delight after playing a significant part in Crossmaglen's victory over St Gall's at Casement Park.

Clarke scored one goal and set up two others as Cross cruised into the Ulster SFC semi-finals.

He says it was important that his side got off to a good start in the match which pitted the 2011 All-Ireland champions against the 2010 All-Ireland kingpins.