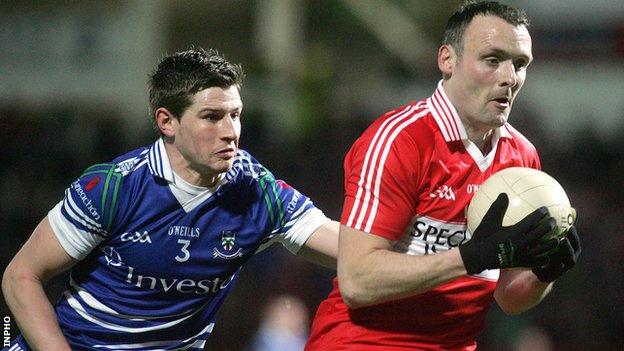 Playing with the breeze, Derry hit the opening five scores and then extended their advantage to 0-8 to 0-1.

Monaghan never got closer than five behind and Niall Forrester's sending off took little gloss off Derry's win.

Bradley put Derry ahead in the opening minutes and the impressive centre half-back Michael Bateson was among the scorers as the Oak Leafers forged a 0-5 to 0-0 lead.

Gerard O'Kane was back in the Derry starting line-up after not being named in the original selection following his spell out because of injury.

Monaghan had been reduced to 14 men by that stage after McKenna had been sent off after getting a second yellow card for a sliding challenge on Brian McCallion.

Derry's lead was cut to five points as substitute Tommy Freeman, back after a year out, Kieran Hughes and Finlay were on target for Monaghan.

However, scores from outstanding half-backs Barry McGoldrick and Mark Craig helped Derry reassert control and despite Forrester's dismissal, for a second yellow card on 57 minutes, the home side eased to victory over a disappointing Monaghan outfit.

Both teams now have two points from their opening three matches in Division 2.