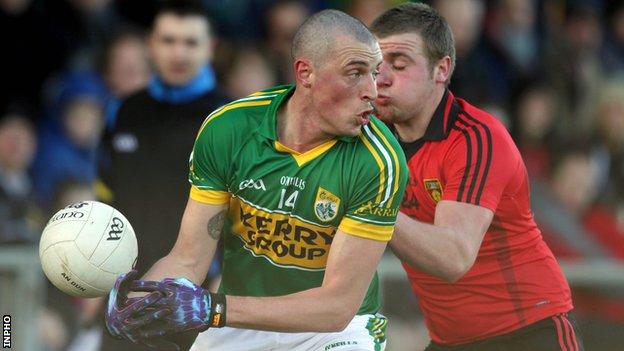 The Mourne County were without injured Liam Doyle as three Barry John Keane points helped Kerry lead 0-5 to 0-3 at the interval.

A Dan Gordon point helped Down move to within one point of the Kingdom but Kerry hit four scores within as many minutes to take control.

Down paid for a number of first-half wides when they had the wind advantage.

Mark Poland put Down ahead before two Keane scores put Kerry ahead.

Daniel Hughes then equalised for Down and after points from Dan Gordon and Bryan Sheehan left it 0-3 to 0-3, Kerry hit the final two scores of the first half.

Down cut Kerry's lead to the minimum after Gordon landed a fine point.

However, the Kingdom ended the game as a contest by landing four points in as many minutes, with the impressive Sheehan and Declan O'Sullivan among the scorers.