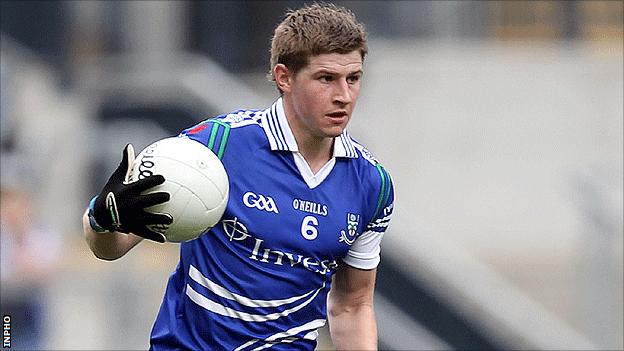 Louth were reduced to 13 men during the second-half when Declan Byrne and Jamie Carr were sent-off.

Darren Hughes then scored an own goal as Louth edged into a 1-14 to 1-12 lead. But Monaghan scored seven points in a row after Byrne's dismissal and Hughes netted a penalty late on.

There was a lot at stake for both sides as defeat would plunge the loser into deep relegation trouble.

Tommy Freeman, making his first start for Monaghan in almost a year, was influential throughout while Paul Finlay scored 0-6 in an entertaining, high-scoring Division Two clash.

There was little to separate the teams in the first-half until McGuinness' goal gave Monaghan a three-point cushion at the break.

Darren Clarke was Louth's main scoring threat and when Darren Hughes deflected the ball into his own net, it looked good for the visitors when they led 1-14 to 1-12.

But the sending-off of Byrne, who picked up a second booking for a foul on Freeman, was crucial.

Monaghan reeled off seven points in-a-row with Finlay, Dick Clerkin and Ciaran Hanratty among the scorers.

Louth had a second player sent-off when Carr hauled Hanratty down in the square. Darren Hughes made amends for his own goal by stepping up and drilling the penalty home to give Monaghan an unassailable lead.

Jim McEneaney, the son of Monaghan manager Eamonn McEneaney, came off the bench to score two points for Louth but the home side held firm to ease their relegation worries.