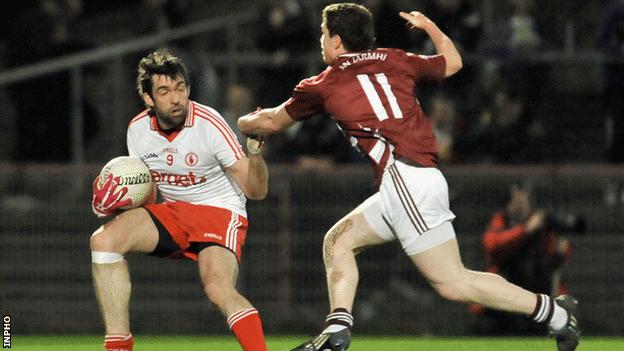 Joe McMahon has been ruled out of Tyrone's Football League Division Two clash with Galway at Tuam as he is suffering from tendonitis of the knee.

McMahon picked up the injury in last weekend's win over Westmeath.

Sean Cavanagh is named in the starting line-up for the first time this season after recovering from a career-threatening shoulder injury.

Cavanagh has made four substitute appearances in his side's four victories to date.

Goalkeeper rotation continues, with Johnny Curran taking over from Pascal McConnell, and corner back PJ Quinn has overcome a minor ankle problem to take his place in an unchanged defence.

Skipper Stephen O'Neill misses out for a third successive game as the Red Hands defend their 100% record.

He has not recovered from a hamstring injury sustained last month, and will not even be on the bench.