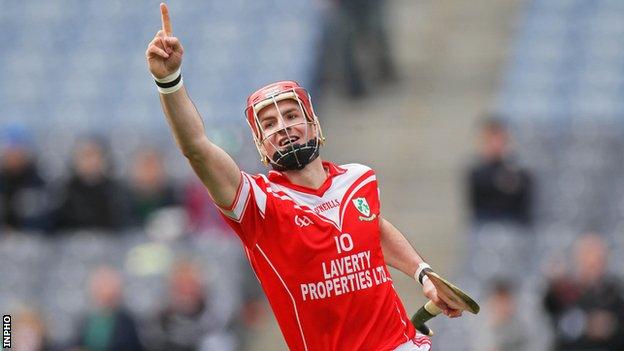 However, Watson's first goal put Loughgiel four up and he then struck two goals in a minute before half-time.

He gambled as he struck a 20-metre free to the net for his second goal before another glorious finish for his third and while Coolderry threatened after the break, Loughgiel regained control.

Loughgiel's victory amid high emotion ended a 29-year wait for their second All-Ireland title after their 1983 success .

And it was a thoroughly deserved victory for the Shamrocks who are the only Ulster club to have lifted the title.

Watson's scoring exploits will rightly be lauded but it was a tremendous team display by PJ O'Mullan's side.

The sense that it was going to be Loughgiel's day came when Watson rocketed in his second goal from the 20-metre free two minutes before the break.

His manager surely would have wanted the forward to take his point but the enigmatic Watson had other ideas as he lashed an unstoppable strike past the five men on the goal-line and into the roof of the net.

Two minutes later, Watson beautifully controlled a long ball from the outstanding Eddie McCloskey and he only needed two more touches on the stick before sliding the ball under keeper Stephen Corcoran.

The goal gave the Ulster champions an astonishing 4-6 to 0-8 lead although Damian Murray did add a further Coolderry point in first-half injury-time.

Casey kicked Loughgiel's opening goal to put his side 1-1 to 0-2 ahead after good work by Joey Scullion.

Efforts from play from Eddie McCloskey and Brendan McCarry then had Loughgiel 1-3 to 0-3 ahead only for Coolderry to draw level, helped by two Brian Carroll scores.

But Loughgiel were four to the good by the 20th minute as Watson slammed to the net from close range after keeper Corcoran had saved a pointblank Casey shot.

Coolderry were still within striking distance at 2-6 to 0-8 in arrears as half-time approached but then came the crucial period of the match as Watson completed his hat-trick of goals.

After going in nine points ahead at the break, Loughgiel's nerve threatened to fail them at the start of the second half as Coolderry hit four unanswered points, with sub Kevin Connolly getting two of the scores.

But Watson pointed a crucial free won by himself in the 37th minute and a reply from Murray was then followed by three more unanswered Loughgiel points, with Barney McAuley's long-range effort adding to two more Watson scores.

Coolderry reduced Loughgiel's lead to six by the 53rd minute but the contest was effectively over within a minute as Watson's 70-metre free was followed by McCarry's second score of the day.

With an unassailable lead, Loughgiel were able to enjoy something of a lap of honour in the closing minutes with McCarry tagging on a closing point.