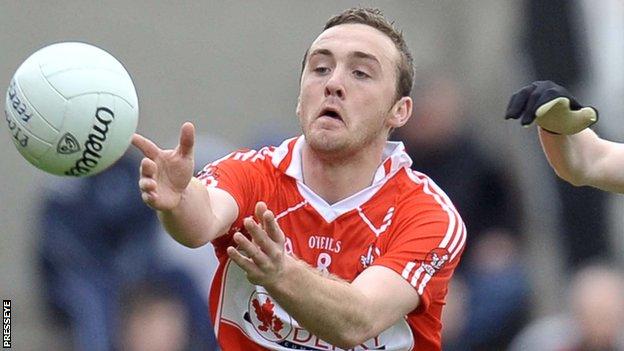 Holders Cavan, Tyrone, Derry and Down all earned wins in Wednesday's Ulster Under-21 Football quarter-finals.

Chris Conroy's goal helped Cavan defeat Armagh 1-11 to 1-5 while Darren McCurry hit five points for Tyrone in their 0-12 to 0-6 win over Donegal.

Emmet McGuckin notched 2-2 for Derry as they accounted for Monaghan 3-12 to 2-3 at Celtic Park.

Ross McGarry and Donal O'Hare notched Down's goals in their 2-11 to 1-9 win over Antrim at Newry.

Cavan burst out of the blocks at Breffni Park as four Kevin Tierney points helped then lead 0-6 to 0-1 against Armagh.

Armagh cut the gap to two points at the break on a 0-6 to 0-4 score-line but first-half substitute Conroy netted for Cavan inside six minutes of the restart.

The Orchard County's Aidan Forker then received a straight red card and Robbie Tasker's late goal was little consolation for the visitors.

Emmet McGuckin (2-2) and defender Fergal Duffin netted the Oak Leafers goals in the comprehensive victory over Monaghan at Celtic Park.

Stephen Sherry registered Monaghan's goal with 10 minutes left on the clock, but it was too little too late for the visitors.

Despite being without injured Ronan O'Neill for the encounter against Donegal, Tyrone earned a comfortable win at Healy Park.

Tyrone led by 0-7 to 0-2 at the break, with wides costly Donegal dearly on the restart, and the Red Hands held

McGarry (1-3) and O'Hare (1-4) claimed all but four points of Down's tally in their five-point win over Antrim at Pairc Esler.

Down led by 1-7 to 1-3 at the interval with Hugh McNulty netting the Saffrons goal after 16 minutes.

The Mournemen will face Tyrone on 4 April with Cavan meeting Derry in the other last-four clash.