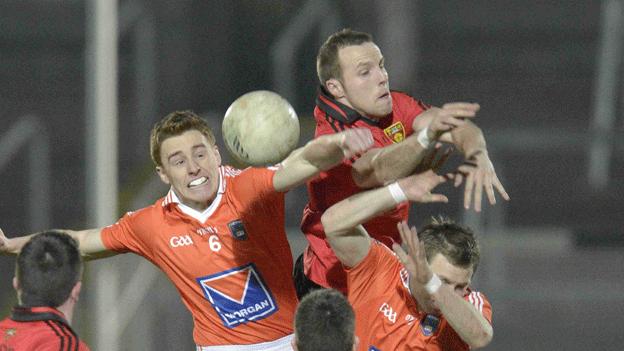 Armagh's hopes of avoiding relegation from NFL Division One were boosted by this thrilling derby victory.

The hosts suffered an early injury blow at the Athletic Grounds when midielder Peter Carragher was stretchered off with a suspected broken leg.

Down led 0-9 to 0-8 at the break and the game was level when Brian Mallon converted a 47th minute penalty.

The visitors regained the lead only for Armagh to equalise before Michael Stevenson scored the winning point.

Armagh had Ciaran McKeever in their line-up after the defender's suspension was lifted pending an investigation.

Two Stevenson points helped the hosts into an early lead before Carragher, who has just returned from a broken leg, sustained a similar injury.

Down grew in confidence as the first half progressed and hit points without reply, including three Aidan Carr frees.

Stevenson fired over the last two points of the half to halt the Mourne team's charge.

It remained close until Mallon banged in a penalty after Down were guilty of touching the ball on the ground.

Back came Down again and they moved in front after points from Daniel Hughes, Carr and Ambrose Rogers.

They were still a point ahead when McKeever levelled and Stevenson held his nerve to fire over the winning point in the final minute.

Down wasted an injury-time chance to equalise as Ben O'Reilly kicked wide.