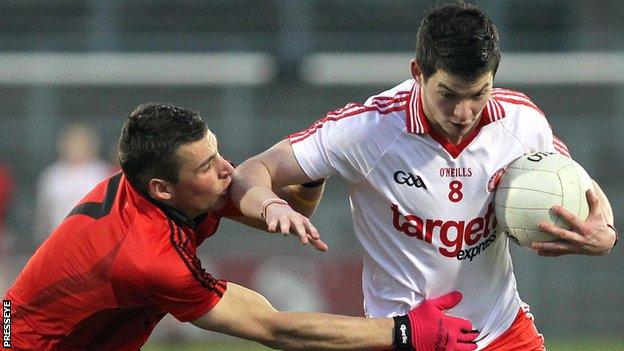 Tyrone and Cavan will meet in the Ulster U21 football championship final after recording contrasting wins in their respective semi-final ties.

Champions Cavan snatched a late goal to beat Derry 2-8 to 1-9 at Brewster Park while Tyrone were easy 0-16 to 1-8 winners over Down at Casement Park.

Tyrone led 0-9 to 0-4 at the break as Donal O'Hare netted the only goal of the game for Down after 49 minutes.

Emmett McGuckian scored 1-1 for Derry in the first-half as they came from four points to lead by two, 1-4 to 1-2 at half-time.

Cavan failed to score in the last 15 minutes of the first-half as Derry hit 1-3 without reply.

It was nip and tuck throughout the second-half and extra-time loomed until Tierney popped up with a dramatic late winning goal.

The result puts Cavan through to their third Ulster final in a row.

They beat Tyrone in last year's final at Brewster Park. The venue for this year's final on Wednesday April 11 is still to be confirmed.

Tyrone were impressive winners over Down, Darren McCurry hitting 0-4. Caolan Daly (0-3), Conor McAliskey (0-3), Thomas Canavan (0-2) and Richard Donnelly (0-2) were among the scorers.

Down hit 10 wides but rallied mid-way through the second-half scoring 1-2 without reply to close the deficit to two points.

O'Hare took a fine catch on the edge of the square and beat Tyrone goalkeeper Darragh McAnenly with a low finish after 49 minutes in the only goal of the game.

However Tyrone finished strongly with points from sub Peter Mallon and a McAliskey '45' to steady the nerves.