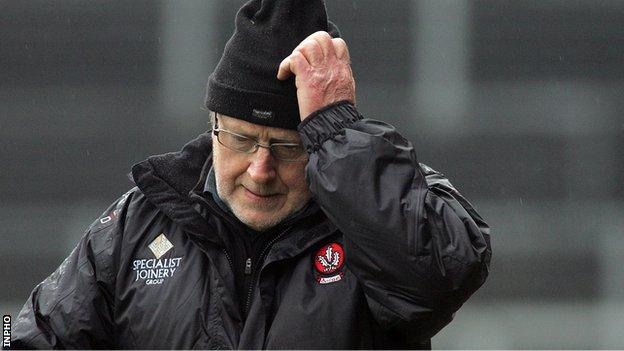 Derry stay in Division 2 but no thanks to their own efforts as they collapsed to an embarrassing defeat against Westmeath who also avoided the drop.

Five Paddy Bradley points helped Derry lead 0-8 to 0-1 late in the first half before Westmeath hit the last two points of the opening period.

Derry's Dermot McBride was sent off as Westmeath fought back to level.

Derry were helped by the first-half wind advantage but that still shouldn't excuse their second-half showing.

Westmeath stopped the rot before the break with Heslin and Kieran Martin both scoring.

Derrn centre half-back McBride was dismissed five minutes into the second half by referee Martin Sludden after getting his second yellow card.

Two points from Denis Glennon and another Heslin effort cut Derry's lead to 0-8 to 0-6 and while Caolan O'Boyle got the visitors scoring again, Westmeath had wrested control of the contest.

After Westmeath drew level at 0-10 to 0-10, Garrycastle's Dolan then struck the crucial goal after being set up by the excellent Glennon.

Eoin Bradley was introduced for Derry midway through the second half after almost a year out because of injury but he could make little impression for a well-beaten Derry side.

Westmeath went on to outscore Derry 1-12 to 0-2 in the second half and the Oak Leaf dressing-room would have been an interesting place to visit after the game as John Brennan surveyed his team's dismal showing.