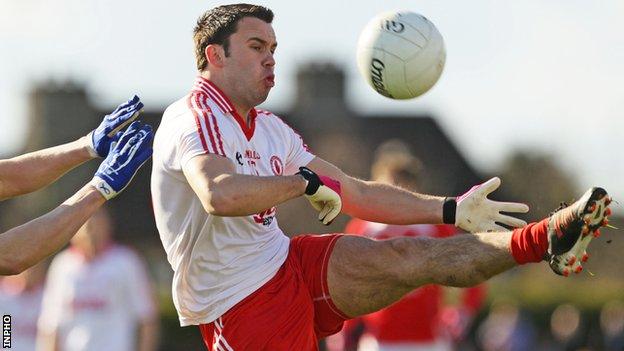 Tyrone forward Kyle Coney looks certain to be ruled out for the rest of this season by a groin injury.

Coney, who has been in superb form during the League campaign, requires surgery after sustaining the injury in a club game at the weekend.

The Ardboe player was injured while attempting to hit a free in the game against Greencastle.

It's another blow for Tyrone after Ronan O'Neill was ruled out for the rest of the season by a knee injury.

O'Neill is scheduled to undergo a cruciate ligament operation next week.

Coney underwent an MRI scan on Tuesday when the extent of his groin injury was revealed.

Ardboe man Coney starred in Tyrone's All-Ireland Minor triumph in 2008 and after briefly flirting with an Australian Football League career returned home before establishing himself in the Tyrone attack this season.

Coney's impressive form in recent matches suggested that he would have been a starter in Mickey Harte's side for this year's Championship.