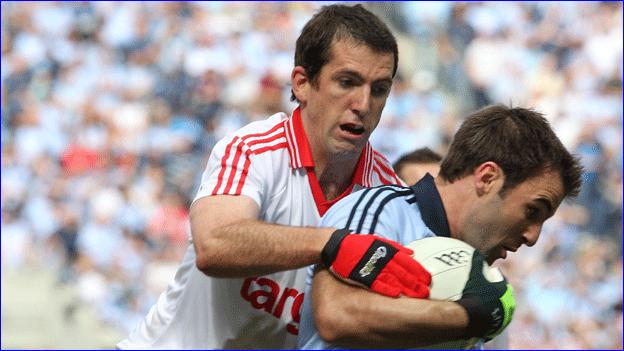 Tyrone full back Justin McMahon has been ruled out of Sunday's NFL Division Two final against Kildare.

McMahon has not been able to train since picking up a hamstring injury in a club game 10 days ago.

Attacker Martin Penrose is also out of the Croke Park title decider.

Penrose is back in training after missing the last three league games with a dislocated shoulder, but has not been able to take part in full contact sessions until this week.

Penrose is likely, however, to be on the bench.

"He'll be in contention for a place on the panel, but not a starting place.

"He hasn't enough work done, but it's good to have him back in full training," said Tyrone assistant manager Tony Donnelly.

Joe McMahon is available again after missing the games against Meath and Monaghan due to tendonitis of the knee.

""Joe did a full week's training last week and a full session this week as well and he's working back to full fitness," said Donnelly.

The Red Hands' top scorer, Kyle Coney, is out for the rest of the season, due to a groin injury which required surgery, sustained in club action.

Ronan O'Neill has also been ruled out for the rest of the season with a knee injury.