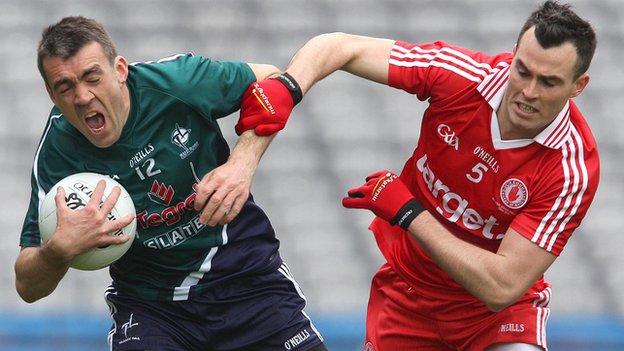 The Reds Hands played with a first-half wind advantage but Kildare led 0-7 to 0-6 at half-time with Stephen O'Neill missing a glorious goal chance.

Aidan McCrory was also stretchered off with a leg injury before the break.

Captain John Doyle and Eoghan O'Flaherty kicked the opening scores for the Lilywhites though two Owen Mulligan points levelled the contest by the ninth minute.

Mikey Conway's point restored Kildare's lead but Mark Donnelly and Niall McKenna replied with scores to nudge Tyrone ahead by the 14th minute.

Both teams were employing a defensive blanket with only two men in the Tyrone attack for large parts of the opening period.

Indeed, Stephen O'Neill barely touched the ball in the opening 25 minutes as the Tyrone attack had a paucity of possession.

Three unanswered points edged Kildare into a 0-7 to 0-5 lead with McCrory sustaining his unfortunate injury injury as he bravely fisted over his own bar as O'Connor looked set to palm into an unguarded net.

O'Neill's free cut Kildare's lead to the minimum but the former Allstar missed his goal chance in injury-time as he hit wide from a tight angle after an Owen Mulligan shot dropped short.

Tyrone appeared to have regrouped effectively at the start of the second half as more pace and direct running helped Mulligan [two] and O'Neill to hit unanswered points.

However, then came probably the key moment of the contest as Kieran McGeeney introduced youngster Fogarty for the misfiring Alan Smith on 48 minutes.

A mistake by Tyrone keeper Johnny Curran gifted a '45 to the Lilywhites which Eoghan O'Flaherty pointed and Fogarty took only one look at the goals before brings the sides level on 51 minutes.

However, that was as good as it got for the Red Hands as Kildare totally controlled the closing 15 minutes of the contest.

Fogarty helped himself to two further points with man of the match Conway [two], Eamon Callaghan, Eoghan O'Flaherty and Doyle, superbly from the sideline, also on target.

O'Neill hit a Tyrone point in injury-time but it was too late for the well beaten Red Hands.