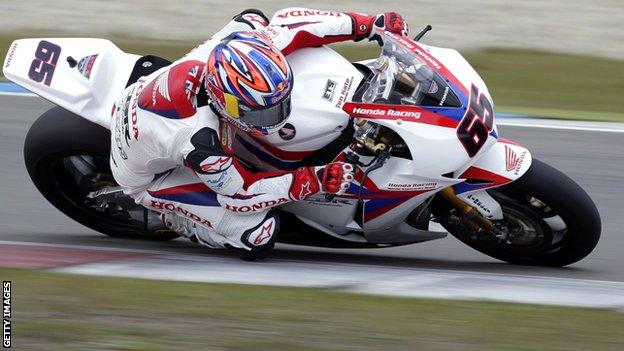 Jonathan Rea earned a dramatic win in Sunday's second race at the World Superbike round at Donington Park after being involved in a last-corner crash.

Leon Haslam led into the last corner but he and his second-placed BMW team-mate Marco Melandri both came off after Rea had made contact with Haslam.

Rea stayed upright to take the win ahead of Max Biaggi and Tom Sykes.

The Ballyclare man was fourth in the opener with Eugene Laverty 15th in race one and crashing out in race two.

The second race saw plenty of aggressive overtaking from all the leading riders as Rea snatched his second win of the season and 10th career win in the series.

On the first lap, Laverty and Carlos Checa touched which led to the Spanish rider crashing and taking out Jakub Smrz and Davide Giugliano.

However, Laverty himself then crashed out on lap 10 to complete a disappointing weekend for the Northern Irishman.

Rea was fourth at the start of the final lap but then moved up ahead of Biaggi.

Haslam appeared to have victory secured heading into the final corner but Melandri attempted to make a daring overtaking manoeuvre on his team-mate as both riders ran wide.

That led Rea to see a gap but he collided with Haslam as the Englishman attempted to close the door and the BMW rider brought team-mate Melandri down after hitting the deck.

Haslam remounted to cross the line in 15th place.

Sunday's action moves Rea up to third place in the Championship standings - 20.5 points behind leader Biaggi while Laverty slips to eighth, 63.5 points off the pace.

Rea said that he had made hard of Sunday's second "crazy race".

"I dropped off the group in the middle stage and then, when I caught the group, I made a big mistake and ran wide at the last corner," said the Honda rider.

"To catch up with five laps to go and make up some places and then cap it off with the win was unbelievable."

In the opening race, Rea was some way off the pace in fifth spot at halfway but gained on the leading four in the closing laps.

Rea passed Biaggi at the start of the final lap and then diced for a podium place with Sykes in the closing stages.

Melandri and Haslam led home a BMW one-two while Toomebridge rider Laverty was well back in 15th.

Honda rider Rea was .21secs behind third-placed Sykes and 1.81 seconds adrift of Melandri.