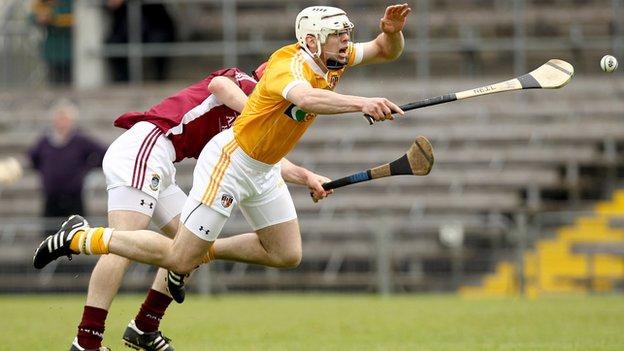 Antrim suffered a shock defeat by 14-man Westmeath who came from six points behind to snatch a stunning 0-14 to 0-12 Leinster SHC win in Mullingar.

Three points each from Liam Watson and Shane McNaughton helped the Saffrons to a 0-8 to 0-3 half-time lead.

By that stage, unfancied Westmeath were minus Conor Jordan who had been dismissed on 30 minutes.

However, Niall O'Brien brought his tally up to eight with a series of points as the Saffrons wilted.

It was a huge setback for the Antrim team and manager Jerry Wallace in his first Championship campaign since taking over from Dinny Cahill last autumn.

O'Brien's heroics sets up a Leinster quarter-final against Galway for Westmeath while Antrim will have the massive task of regrouping for the qualifiers after their Ulster Final clash in July.

Antrim forward Shane McNaughton said in the run-up to Saturday's match that he believed the squad could aspire to reaching the All-Ireland semi-finals.

On the evidence of this display, that looks a remote prospect.