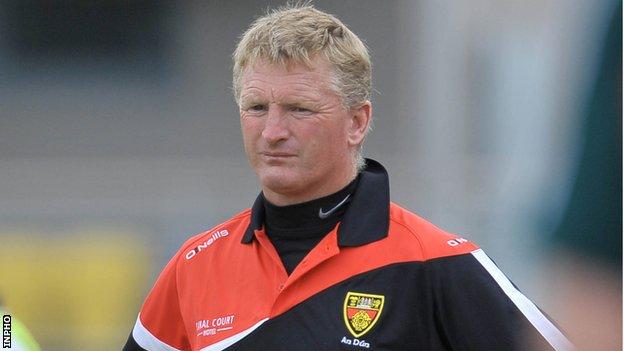 Down and London must replay their Christy Ring Cup semi-final tie in the English capital next weekend after the sides drew 1-21 each after extra-time.

Paul Braniff was sent-off five minutes into the second half and London scored seven unanswered points to lead by three. Conor Woods scored a late goal.

London's Colm Quinn was dismissed but Jonathan Maher made it 1-21 to 1-20, only for Michael Turley to equalise.

Braniff scored six points from frees in the first half while London's Martin Finn contributed four frees, before coming off injured.

Dunne replaced Finn and scored his side's goal just before the interval.

London looked to have taken control after the Mournemen were reduced to 14 men but Woods found the net from a free in added time to level the scores at 1-16 apiece.

Quinn was sent-off for a second yellow card offence, also in injury-time.

Turley landed three points in extra-time to nudge Down a point ahead but Maher's point appeared to have sealed victory for the visitors.

Turley knocked over a free from the final play of the match to earn Gerard Monan's side another chance to progress to the final.