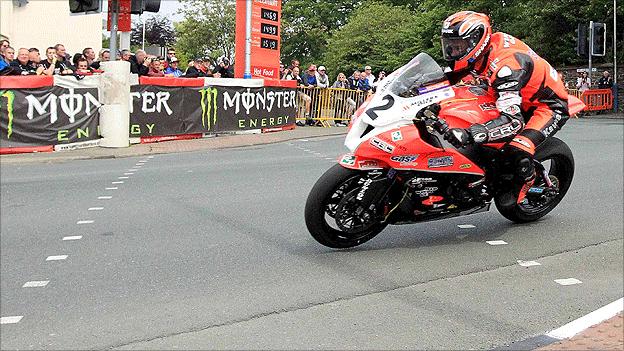 Ryan Farquhar's preference for the privateers' paddock belies his status as a former TT winner and leading contender for honours at this year's event.

While the other top factory teams display their wares in front of the public in the showpiece pits area, the Dungannon rider's KMR Kawasaki team are barely visible in the section reserved for competitors who are not expected to feature at the top of the leaderboard.

It's a situation that Farquhar has become familiar and happy with in recent years.

"I am here to race motorcycles, not to impress people with the size of my transporter and the layout of my bikes.

"I've opted out of the whole display thing and it gives the team the chance to concentrate on preparing our machines to the highest possible standard without any distractions," explained the 36-year-old.

These days Farquhar combines his role as a rider with that of team manager, engine builder and mentor to young TT debutant Jamie Hamilton, but his primary focus remains on winning races.

This year he hopes to bridge a seven-year gap since his last success on the Mountain Course when he took victory in the Supersport class.

A year previously, he had scored his maiden win in the Production 600 event.

"I came really close again in 2010 as I led for much of the Superstock race, before Ian Hutchinson beat me by 1.3 seconds - that was hard to take.

"I was also runner-up in the Senior race that year, although that was more because a lot of the faster riders retired and I kind of ended up on the podium by default.

"Last year my luck was really out as I crashed in practice and was only able to take in the Senior race at the end of the week.

"I was really sore but at least I had a finish to show for all my hard work in the run-up to my most important race of the year."

Farquhar's best chance of occupying top spot on the podium is likely to come in the Friday's Lightweight class for Supertwins machines, for which he was comfortably quickest in practice.

It is a class that Farquhar pioneered and he has proved almost unbeatable on the innovative twin-cylinder bikes on road circuits throughout Ireland and the United Kingdom.

He has also clocked up international victories on his 650cc Kawasaki at the Ulster Grand Prix and North West 200 and is keen to add an Isle of Man victory to that impressive list.

Supertwins could become the main category on the national road race scene.

"The bikes are really stable, easy to ride and so much fun," argued the eight-time UGP winner.

"They are economical too as they are pretty cheap to build and have proved reliable.

"My KMR machines may not be the fastest through the speed trap but results show that the overall package is right.

"To take the top three places at the North West was a dream come true and with Michael Rutter and Jamie on board my bikes at the TT a similar result could be on the cards.

"The Supertwins put out about 90bhp and I would say they could lap the Mountain Course at 116mph and maybe 117mph - I'd be amazed if anyone goes quicker than that.

"The good thing is that you can really wring their neck if you are an experienced rider, while if you are more of a novice they will not go too out of shape if you make a mistake.

"I believe this class really is the future of road racing and may even replace the Superbikes as the main category on the national road race scene.

"They may also become a major player at British Championship level and although Suzuki and Kawasaki are the only manufacturers involved at the moment, I believe Honda and Yamaha will jump on the bandwagon when they see the impact that race successes will have on the sale of road bikes."

Farquhar loves the TT course so much that he also gains some valuable track time by taking in the Manx Grand Prix classic races in August, but he has hinted that retirement may be on the cards in the near future.

"I've thought about it but I love it so much and it is really difficult - I'll just see how it goes for the rest of the season," said the man who has earned a record 169 Irish national road races wins.