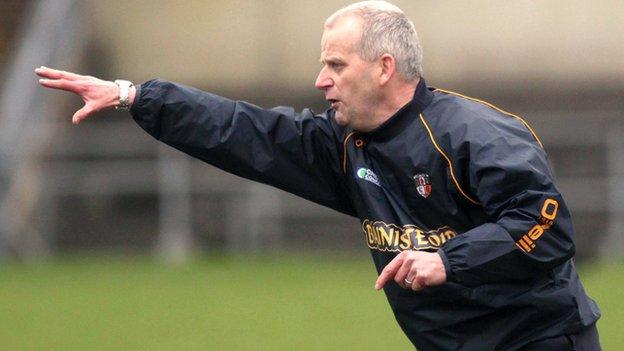 Jerry Wallace has resigned as Saffrons hurling boss in the wake of their championship defeat to Westmeath.

It is anticipated that Frankie Quinn and Collie McFaul will act as interim managers of the Saffrons team.

Wallace has cited a row with RTE as his reason for quitting with the Corkman saying that the broadcaster had "undermined my integrity".

According to Wallace, this follow his attempt to ask RTE not to broadcast footage of an incident which led to Cormac Donnelly's sending-off in the shock 0-14 to 0-12 defeat by Westmeath.

"This statement is being issued by me in response to an article which appeared in a national newspaper this Friday morning under the headline 'RTE Chiefs say analysts were not contacted by Wallace'," said Wallace's statement.

"For the record, my intervention with RTE staff at the Westmeath match in question was to ascertain if they had full footage of the incident which commenced with an attack on one of my players, Liam Watson.

"I made this enquiry as I felt that fair procedure, towards my player Cormac Donnelly, would not be followed by merely showing a selective excerpt from the fracas which was started by Westmeath.

"In their statement RTE deny such contact took place.

"Unfortunately, RTE have undermined my integrity as an individual and they have also undermined the bond and trust which is essential between Jerry Wallace and the Antrim senior hurling team 2012."

Antrim were beaten 0-14 to 0-12 by Westmeath in the Leinster SHC and will take on either Limerick or Laois in the All-Ireland qualifiers on 30 June.