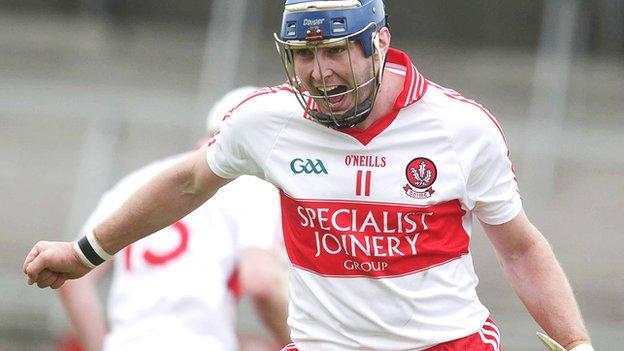 Ruairi Convery and Paddy McCloskey each scored two goals to help Derry to victory over Armagh in the Ulster SHC quarter-final at the Athletic Grounds.

Convery grabbed Derry's first goal after four minutes and McCloskey netted a second to give the Oak Leafers a 2-9 to 0-9 lead at the break.

McCloskey and Convery hit the net again before Ruairi McGrattan scored Armagh's only goal direct from a free.

Conor Quinn was sent-off for Derry, who will play Down in the semi-final.

Armagh, on the back of their Nicky Rackard Cup triumph, went into the game with a quiet confidence that they could cause an upset, but they were always chasing the game.

The Orchard men were denied by two fine saves from goalkeeper Oisin O'Doherty in the first half.

The visitors easily held on for the win despite the dismissal of Quinn for two yellow cards.