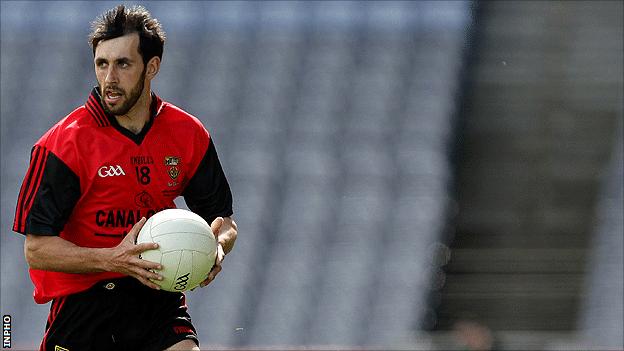 Down half-back Aidan Brannigan has been given a one-match ban after television cameras caught him hitting an opponent.

GAA disciplinary chiefs decided on the suspension after watching TV pictures of the Down player striking Martin McGrath of Fermanagh.

If a match is being televised it is pretty much guaranteed that one of 10 cameras will have caught an incident a referee or his linesmen might have missed.

There will always be incendiary moments in a physical game, but the modern gaelic footballer must be ultra-disciplined.

Throw a punch and, in all probability, you'll pay the price whether at the time or retrospectively.

When television brings the games to living rooms, it does so "warts and all".

Gerard McCartan comes into the Down line-up for the game, while Donal O'Hare retains his place in the side.

O'Hare was a late replacement for Arthur McConville prior to the win over Fermanagh.

The incident involving Brannigan, during the last eight clash at Brewster Park, was not spotted by the match officials.

It happened on the touchline, just after referee Syl Doyle had red-carded Fermanagh's Daryl Keenan for striking Conor Laverty.

Brannigan, who plays for the Kilcoo club, decided not to contend the suspension at the Central Competitions Control Committee hearing.

Down are attempting to reach the provincial final for the first time since 2003 when they were beaten by Tyrone in a replay.

The Mourne men have not won the Ulster since 1994 when, with present Down manager James McCartan featuring as a player, they went on to lift their last All-Ireland Championship.

High profile stars Benny Coulter and Dan Gordon have failed to make the starting line-up because of injury.

They may however be fit to play some part in Sunday's match.

They were absent for the match against Fermanagh as forward Coulter was recovering from a broken ankle and Gordon from a foot fracture.

Monaghan claimed their semi-final place with a three-point win over Antrim at Clones.

According to the bookmakers, Eamon McEneaney's men go into Sunday's clash as underdogs.