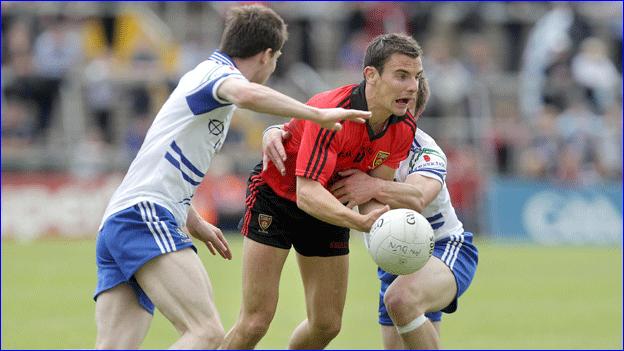 Down recovered from a nine-point deficit to secure a dramatic last-gasp win over Monaghan in the first Ulster SFC semi-final at Armagh on Sunday.

Monaghan dominated the first half and led 0-11 to 0-2, before Aidan Carr scored with a penalty in added time.

Down fought back to within a point but a goal by substitute Tommy Freeman gave Monaghan a much-needed boost.

A Carr point drew the Mournemen level and Darren O'Hagan knocked over the decisive point in injury-time.

Monaghan were boosted by the return of captain Darren Hughes to their starting line-up while Paul Finlay was also fit to take his place in the side after overcoming a shoulder injury.

Down, who have not won an Ulster Championship since 1994, were without the suspended Aidan Brannigan.

The Farney County belied their status as the bookmakers' pre-match underdogs by dominating the early proceedings.

A Hughes free, an outstanding point from the right touchline by Paul Finlay and a Conor McManus point saw Eamon McEneaney's men race into a three-point lead.

Ambrose Rogers replied with the first score for the Mourne county, but further points from McManus (2) and Finlay (2) extended Monaghan's lead to six points.

Donal O'Hare and McManus traded frees, and then McManus scored his fifth point and Finlay his fourth as Monaghan continued to enjoy the upper hand.

Dick Clerkin knocked over his first point but Carr scored a penalty after Vinny Corey had brought down Conor Laverty.

O'Hare landed the first score of the second half from a free and then Kevin Duffin got his name on the scoresheet.

A further free from O'Hare and two Laverty points reduced Down's deficit to one as the Mournemen made good use of their wind advantage.

James Turley squandered a goal chance, Hughes landed a point for Monaghan and Carr responded for Down.

Substitute Freeman fired the ball into the net in the 57th minute to extend the lead to four points, but O'Hare brought his side to within two with further points.

A Finlay free was cancelled out by a score from substitute Benny Coulter and then Down went into overdrive.

In a frenetic finish Liam Doyle, Carr and O'Hagan scored the vital points to secure their side's place in an Ulster final for the first time since 2003.

James McCartan's team will face the winners of next Saturday's semi-final between Tyrone and Donegal in the 22 July decider.