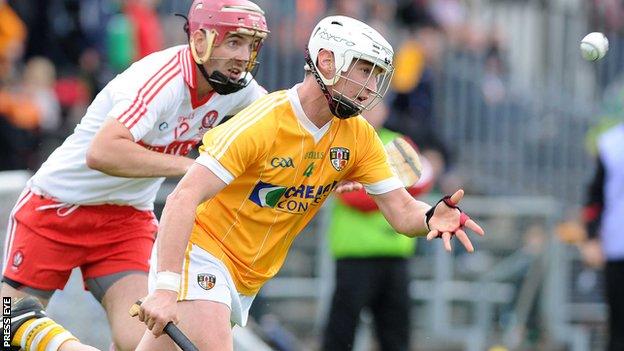 Antrim regrouped from last week's hammering by Limerick as they earned their 11th straight Ulster Hurling title with a facile win over Derry.

Conor Carson's goal gave Antrim an early lead and Oak Leaf keeper Darrell McDermott made the first in a series of sensational saves at Casement Park.

The Oak Leafers were competing in their first Ulster final since 2003 and had not lifted the trophy since 2001.

Antrim, who included seven members of the All-Ireland Club winning Loughgiel Shamrocks team in their starting team, went into the final after being humiliated 8-26 to 1-15 by Limerick to exit from the All-Ireland Championship last weekend.

But Derry, plucky as they were for long periods of Sunday's contest, are a vastly inferior outfit even to a Limerick side probably not in the top four teams in the country at present.

Oak Leaf keeper McDermott made the first of his four pointblank saves in the opening seconds to deny Neil McManus but he could do nothing about Carson's goal in the seventh minute.

McDermott denied McManus again midway through the first half but Antrim hit five out of six scores before the break to increase their advantage to 1-9 to 0-5.

Liam Hinphey and Ruairi Convery were trying hard for Derry but Antrim were easily winning the game despite rarely having to get out of second gear.

Derry's last chance at summoning up any kind of comeback went when Convery's 21-metre free was blocked shortly after the restart.

McDermott made two more brilliant saves but as Derry tired, Antrim began to score at will.

Shane McNaughton capped his first individual display with a 63rd-minute goal which came shortly after Craig had been red carded following a clash with Liam Watson.

Warnock also received his marching orders before the end for a late pull on Eddie McCloskey which didn't prevent the Antrim forward scoring his team's third goal.