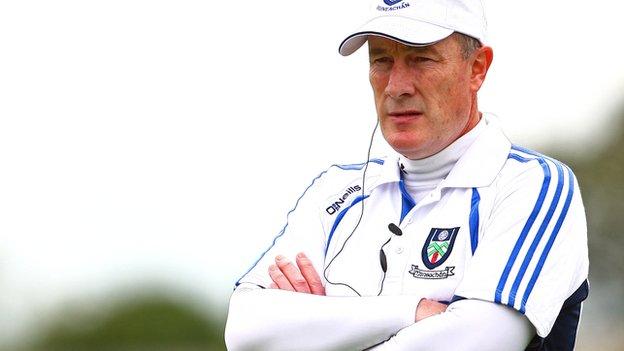 Eamonn McEneaney has stepped down as Monaghan manager following the team's championship exit on Sunday.

The Farney men suffered a 2-12 to 0-12 defeat by Laois in the All-Ireland SFC round two qualifier in Portlaoise.

The former Louth boss took Monaghan to the Ulster semi-finals this year before losing to Down.

McEneaney was Monaghan boss from 1996 to 1999 and returned to the post in October 2010 after the departure of Seamus McEneaney.

"I have given it all I can. The job that has to be done now will take somebody else three or four years to do," said McEneaney.

"I think it is time for somebody to come in and do that. I will be talking to the county board about it.

"I have given Monaghan 20 years as a player and a manager. I have done my level best over the last couple of years.

"I am not a good loser and it is hard to take. I cannot thank all the lads enough for the effort thay have given."

Monaghan's season really turned on that remarkable semi-final defeat by Down in the Ulster semi-final.