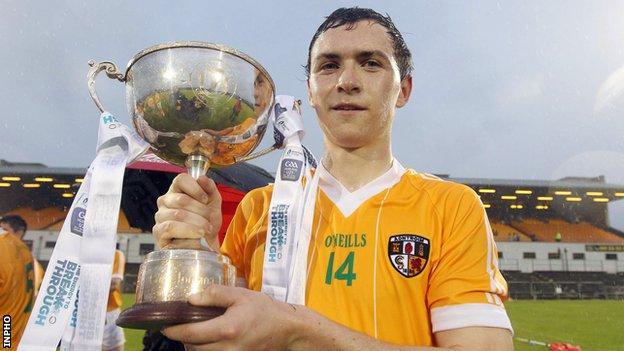 Antrim and Derry will contest the Ulster Under-21 hurling final after wins over Armagh and Down respectively.

Antrim delivered a strong second half display at Pairc Esler in Newry to claim a 1-18 to 0-11 win over Armagh.

A fifth-minute Conor McCann goal helped the Saffrons to a 1-7 to 0-6 interval lead, with Conor Corvan keeping Armagh in touch.

Goals were key for Derry as they advanced to the final with a 3-15 to 2-10 win over Down at Casement Park.

The sides were tied at 1-2 to 0-5 after 15 minutes following an Alan Grant point, but once Derry got their first goal from Shane Farren, the Oak Leafers never looked back.

Five pointed frees from Farren helped Derry to a 1-10 to 1-4 interval lead.

Down started the second half brightly cutting the gap to three points inside six minutes of the restart.

However a 44th minute penalty goal from Farren put Derry in the driving seat again.

Down cut the gap with their second goal, but Niall Ferris completed the Derry hat-trick late on to ensure an eight-point win.

The sides will meet in the Ulster final next Wednesday at 19:30 BST.