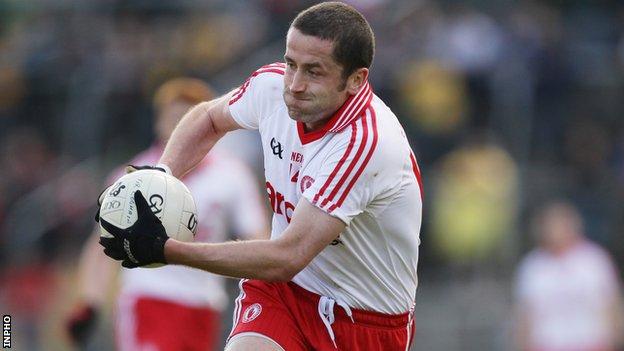 Stephen O'Neill is set to be fit for Tyrone's All-Ireland Football qualifier against Kerry on Saturday after missing the win over Roscommon.

O'Neill was sidelined for last weekend's game by a calf injury but assistant manager Tony Donnelly expects the former Allstar to be available.

"It was a slight problem with the calf. It cramped up on him, but it looks like it's going to be okay, all clear."

Donnelly added:"He's our captain and our leader, a very important player to us and we're very happy to have him available to us at the weekend."

But Justin McMahon looks likely to miss out for a third successive game.

The defender is struggling to shake off a hamstring injury which has restricted him to just 35 minutes of championship football this season - the first half of the Ulster SFC quarter-final win over Armagh.

Donnelly stressed that no risks will be taken with McMahon's injury and hinted that 20-year-old Conor Clarke will continue at full-back.

"Justin had a little tightness in the hamstring, and that's still the case. It doesn't feel right at the present moment for him.

"When that's the case, you can't take a risk, particularly with a hamstring.

"The lads that are fit and going well are entitled to the game time, whereas with someone like Justy, who is struggling a wee bit, you can understand why the place would go to Conor, with the form he's in, plus his fitness levels."

Tyrone, with the exception of long-term injuries, havean otherwise clear bill of health for the trip to Killarney, with PJ Quinn's return to fitness giving them and extra defensive option.

Minor player Darren McCurry scored four points from play after coming on as a substitute against Roscommon and it likely to be on the bench again.