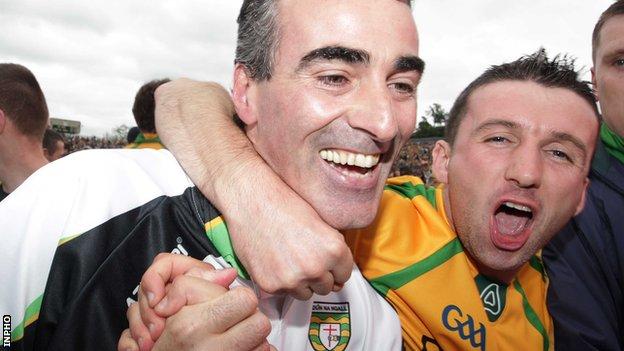 Donegal clinched back-to-back Ulster Football titles for the first time in the county's history as they routed Down in the provincial final.

Donegal began to take control after the break and Frank McGlynn's 50th-minute goal extended their lead to six points.

As Down wilted, Donegal tagged on late scores with Colm McFadden top-scoring on six points.

Down suffered a major blow before the start as Daniel Hughes was forced to drop to the bench because of a hamstring injury while another change saw Liam Doyle replacing Eoin McCartan in the attack.

Donegal were also forced to make a late change as Declan Walsh replaced injured Eamon McGee in the half-back line.

Ryan Bradley hit the opening point of the game for Donegal but Down made a promising start as they hit three unanswered scores to lead 0-4 to 0-2.

Donal O'Hare possibly should have aimed low for goal instead of blasting over the bar from close range to level at 0-2 to 0-2 in the 15th minute after a superb Mark Poland run.

The holders were lacking their usual intensity at that stage with Ambrose Rogers' strong running causing the Donegal defence some problems.

But Donegal were back in the lead by the 30th minute as Bradley's superb ball sent a charging McLoone into space and he held his nerve to slot past Brendan McVeigh.

Rogers had an immediate chance to rattle the net at the other end as the Donegal defence was breached but he blasted over a levelling score.

Six further scores were notched in an entertaining further seven minutes of football before the break with Declan Walsh's second point of the day giving Donegal the most slender of leads going into the break.

Down started the second half without Benny Coulter as his recent injury problems caught up with him again although he was reintroduced with around 15 minutes remaining.

Donegal began to take a grip on the match with the introduction of Martin McElhinney helping the team's cause.

His run set up a superb point for the the previously subdued Michael Murphy in the 40th minute and Donegal were three ahead by the 49th minute helped by two scores from half-back and man of the match Mark McHugh.

The strong-running McGlynn was also having a superb game for the holders and he coolly blasted to the net to effectively kill off Down's challenge with fully 20 minutes to go after a perfectly weighted pass from Murphy.

By that stage, James McCartan had been forced to introduce Danny Hughes from the bench and he did go on to force a good save out of Paul Durcan in the closing stages.

The win puts Donegal in the All-Ireland quarter-finals while Down must regroup for next weekend's four-round qualifier against Tipperary.