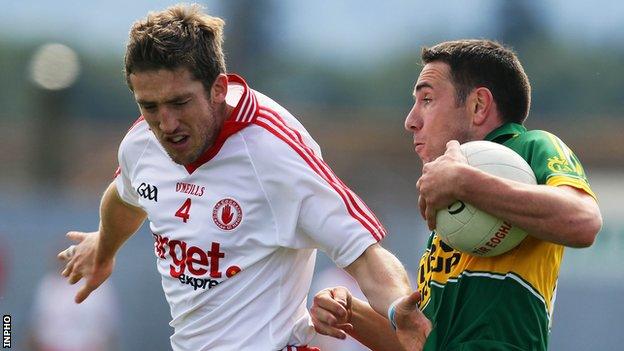 Kerry avenged the three Championships defeats by Tyrone over the last decade as they comprehensively defeated the Red Hands in the All-Ireland qualifier.

The Kingdom's resolve was evident from the off as they moved 0-8 to 0-2 ahead.

Tyrone hit the last two points of the first half and Conor Gormley's goal cut Kerry's lead to two points.

But Kieran Donaghy replied with an immediate Kerry goal and Brian McGuigan's sending-off summed up a bad day for the well-beaten northerners.

There was a suspicion that Donaghy's goal may have been a square ball although TV replays were inconclusive.

McGuigan had been on the field for less than 90 seconds when he received his marching orders in the 57th minute for a retaliatory elbow in the back of Declan O'Sullivan.

Perhaps a booking may have represented a more appropriate punishment in a niggly contest but it was little surprise to see a red card finally being handed out.

Tyrone felt that Kerry sub Patrick Curtin should also have received a red card late on for a dangerous high tackle on Colm Cavanagh.

But there was no doubt that Kerry had been the better side.

The atmosphere was intense - on and off the field - as over 25,000 spectators crammed into a sun-drenched Fitzgerald Stadium.

Declan O'Sullivan, who went on to have an outstanding game, opened the scoring and while Colm Cavanagh levelled, Colm Cooper quickly restored Kerry's lead and Tyrone were never to get on terms again in the contest.

The 0-3 to 0-2 lead of the 14th minute had become a six-point margin by the 33rd minute as an utterly dominant Kingdom notched five unanswered points.

Tyrone were being completely outplayed in the middle third of the field with Declan O'Sullivan and man of the match Paul Galvin both winning a lot of possession.

O'Sullivan, Cooper and Bryan Sheehan all hit two first-half points and Tyrone were fortunate be only four adrift at the break after McCurry and Martin Penrose notched the last scores before the interval.

Kerry had missed a series of other great chances and there was that suspicision they might be made to pay in the second period.

Sub Aidan Cassidy, who had been introduced for Mattie Donnelly before half-time, had a Tyrone goal chance shortly after the restart but elected to take his point.

Tyrone then appeared to have got the break that they needed in the 43rd minute when Gormley deflected the ball into the Kerry net after Brendan Kealy have saved Joe McMahon's initial shot.

The goal cut Kerry's lead to 0-10 to 1-5 but within a minute the margin was five again as Donaghy palmed to the net after Sheehan's unselfish pass although there were question marks over whether the goal should have been cancelled out for a square ball.

Any remote prospect of a late Red Hand fightback was ended by McGuigan's indiscipline as his elbow into O'Sullivan's back meant an ignominious departure for the Ardboe man less than two minutes after being introduced.