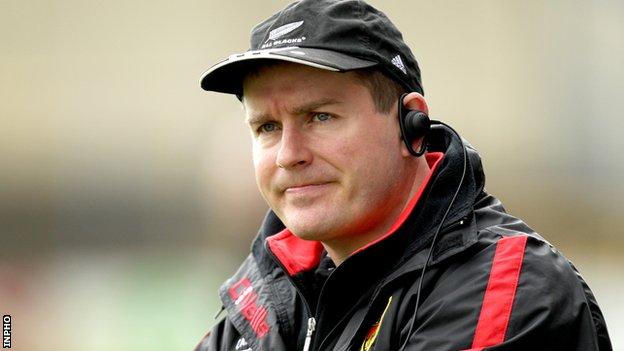 Conor Garvey takes over from Daniel McCartan in the full-back line.

Benny Coulter is named in the starting line-up but another injury concern Daniel Hughes is not included.

Coulter was withdrawn at half-time last weekend only to come back on midway through the second half.

Hughes wasn't risked from the start in the provincial final because of a lingering hamstring injury but was introduced early in the second half.

Down manager James McCartan insists that his team will not underestimate Tipperary in Saturday's fourth-round qualifier.

The Division 4 team have beaten Offaly, Wexford and Antrim to earn a shock place in the final 12 of the All-Ireland Football Championship.

"Tipperary are one of only two teams we've dropped points against in the league at Pairc Esler over the last couple of years," said McCartan.

"Kerry were the other team."

Tipperary and Down were both in Division 2 when the sides met in the Football League on 6 March 2010.

The Munster county hit the last three points to force a 0-14 to 1-11 draw at Pairc Elser and McCartan says he was impressed with the Tipp outfit on that occasion.

McCartan's caution is understandable given Tipperary's stunning turnaround in form over the last four months.

Then manager John Evans stepped down from the Tipp down in late March after the county had suffered its fifth successive League defeat.

Corkman Evans, who was lauded for his work in establishing excellent underage structures in Tipperary, was replaced by Peter Creedon who has gone on to achieve heroics with the Premier County squad.

Tipperary gave Kerry a tough examination in the Munster Championship before earning their three qualifiers wins in games at Thurles.

Antrim manager Liam Bradley acknowledged that Creedon's team were "full value" for their victory over the Saffrons at Semple Stadium last weekend.

Not surprisingly, Creedon has named an unchanged team for Saturday's Mullingar contest [16:00 BST].

Down face the difficult task of returning to action only six days after last weekend's Ulster Final hammering by Donegal.

"It's probably a flawed system but it is what it is and we have to get on with it and lift the guys' heads up and try and see if we can turn it around," added McCartan.

"Six days is going to be difficult but there are good strong characters in the dressing-room."

Down will have two teams in action in Mullingar, as fourth round football qualifier will be preceded by the All-Ireland minor hurling quarter-final tie between Down and Clare [14:00].

The other fourth round qualifiers see Kieran McGeeney's Kildare take on Sligo in Hyde Park, Roscommon on Saturday [18:30] while Meath play Laois in Tullamore [15:30].

Kerry, the conquerors of Tyrone last Saturday, will play Clare in the Gaelic Grounds, Limerick on Saturday night [19:00].