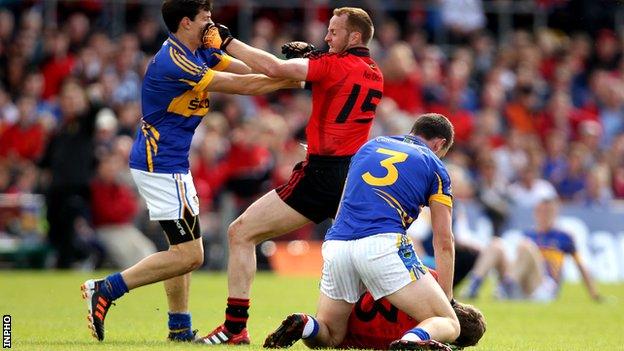 Down secured their place in the All-Ireland football quarter-finals as they beat Tipperary 1-13 to 0-11.

Two Mark Poland points helped Down lead 0-5 to 0-0 at Mullingar and after Tipp hit four of the next five scores, Benny Coulter scrambled in a vital Down goal on the stroke of half-time.

Down extended their lead to 1-11 to 0-7 but Tipperary hit four straight points to trail by three after 64 minutes.

However, points by star duo Mark Poland and Ambrose Rogers eased Down nerves.

Down played with the advantage of a strong wind in the first half and made a good start as the outstanding Rogers fired over a 50-metre free.

Two Poland frees were then followed by scores from Dan Gordon and Brendan McArdle as Down moved into a 0-5 to 0-0 lead by the 22nd minute.

However, Tipperary had missed early chances and Michael Quinlivan's 23rd-minute point was quickly followed by a Peter Acheson score.

Tipperary were the better team in the 15 minutes before half-time as the impressive Brian Fox began to pick up a lot of break ball around midfield.

The Premier County appeared to be in a great position when Fox's point cut Down's lead to 0-6 to 0-4 just before the break but then came the key moment of the match as Coulter bundled in his goal on the stroke of half-time.

Conor Laverty reacted quickly after the ball had struck the woodwork and he squared across the face of goal for Coulter to divert the ball to the net.

Down competed more effectively in the middle third of the field after the interval and points from Rogers, Kevin Duffin and Coulter [two] helped extend their advantage to 1-11 to 0-7.

However, the excellent Poland's steadying point halted Tipperary's momentum and Rogers completed the scoring with his fourth point of the game a minute from time.

Down will learn their quarter-final opponents on Saturday evening while Tipperary can look back on a hugely creditable qualifier run which saw wins over Offaly, Wexford and Antrim.