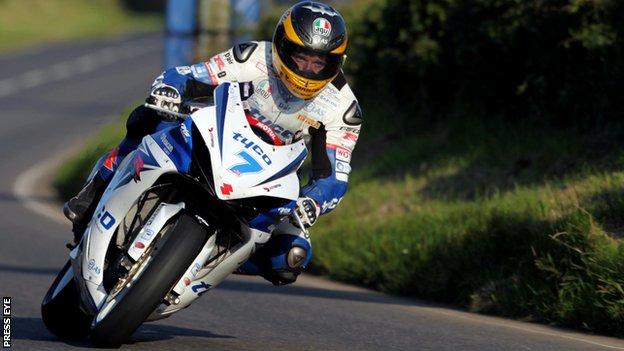 Guy Martin clinched pole position for the two Superbike races at Saturday's Ulster Grand Prix as he set the fastest lap in official practice on Thursday.

The Lincolnshire man lapped at 131.70pmh on the Dundrod circuit which left him just ahead of the Dunlop brothers Michael and William.

However, remarkably Michael Dunlop were on to record a faster lap in Superstock practice as he clocked 132.02mph.

On his honda machine, Michael Dunlop was second fastest in the Superbike session with a lap of 131.57 which left him .13mph behind polesetter Martin.

But riding his Kawasaki bike in Superstock qualifying, Dunlop then produced the fastest lap of the week with his 132.02 which left him way ahead of Bruce Anstey (129.92) and superbike pacesetter Martin (128.82).

William Dunlop claimed Supersport pole with a 126.82mph which left him ahead of Gary Johnston and Michael Dunlop.

Ryan Farquhar dominated the Supertwins qualifying ahead of Ollie Linsdell.

The margins were much tighter in the Superbike session with third fastest William Dunlop also lapping at more than 131mph.